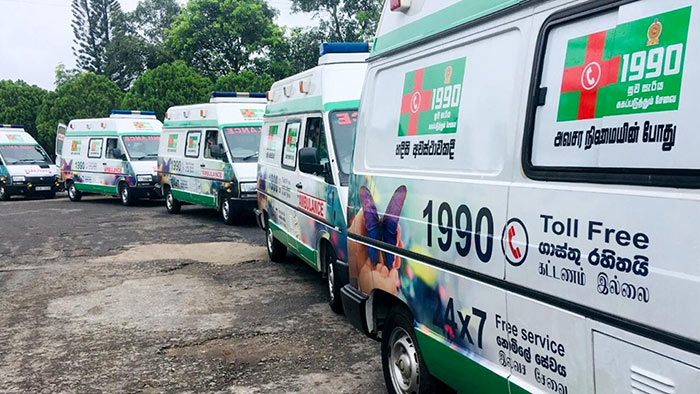 The Emergency Ambulance Service Suwaseriya was launched in the Eastern Province in a special ceremony on Sunday in Ampara, a release from the Indian High Commission said.

With this launch, the islandwide expansion of the Emergency Ambulance Service is complete. The service is now available in all nine provinces.

Indian External Affairs Minister Dr. S. Jaishankar addressed the gathering through a special video message. He recalled his personal connect with the project since its inception. Dr. Jaishankar noted that the service has become a brand in itself. He also recalled how the service had helped Sri Lanka during floods and the recent terrorist attacks. He also pointed out that the project was a great example of what India and Sri Lanka can achieve together.

Indian High Commissioner Taranjit Singh Sandhu in his address mentioned that the project symbolises the spirit of India, which is nothing but the spirit of sharing. He also noted that India will forever remain the ‘first responder for Sri Lanka’.

The islandwide expansion of the Emergency Ambulance Service was started with the launch in Jaffna in July 2018 wherein Indian Prime Minister Narendra Modi joined Prime Minister Ranil Wickremesinghe through a live video conference from New Delhi.

During the visit of Prime Minister Modi to Sri Lanka in March 2015, a request was made by Premier Wickremesinghe to launch a pre-hospital emergency ambulance service in Sri Lanka. Accordingly, the 1990 Emergency Ambulance Service was launched in the Southern and Western Provinces in July 2016 under an Indian grant of US$ 7.5 million. This grant covered purchase of 88 ambulances, operational expenditure of the service for one year, and setting up of an emergency response centre.

Given the positive impact of the project, Prime Minister Wickremesinghe requested the Indian Prime Minister for extension of the Emergency Ambulance Service across the island. Prime Minister Modi made an announcement regarding the expansion of the ambulance service islandwide under Indian government grant assistance during his visit to Sri Lanka in May 2017. An additional grant amount of US$ 15.02 million was provided by India to undertake islandwide expansion which covered purchase of 209 ambulances, operational expenditure of the service for one year and training costs.

The service has been appreciated by the people, given the quick response time, efficiency of operations, and employment and training involving local people.

The emergency ambulance service which can be obtained by simply dialing toll free no ‘1990’ on any local network, is the largest Indian grant project in Sri Lanka after the Indian Housing Project.

India remains committed to further strengthening the bilateral partnership with Sri Lanka based on Sri Lanka’s own choices and priorities and through effective implementation of people-oriented projects, the release said.