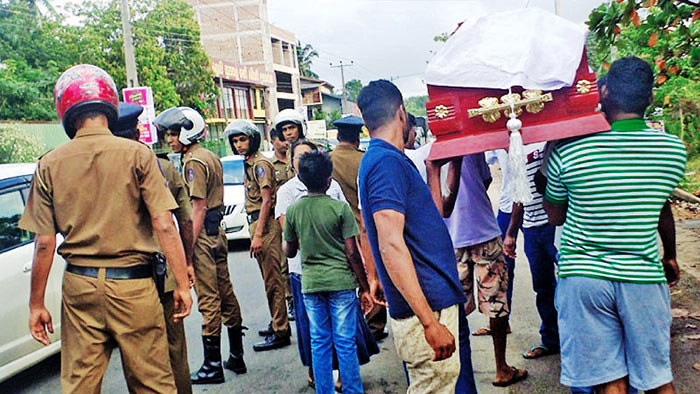 A group of villagers in Athurugiriya area held a protest yesterday alleging that a mentally ill patient had died due to torture while in Police custody.

The family members of the deceased person carrying his coffin for the last rights protested blocking the Malabe – Godagama main road near Athurugiriya town.

The deceased person, a resident of Kahantota, Malabe had been arrested on August 24 for allegedly distilling illicit liquor.

The relatives say, when they went to seek bail for the arrested victim he had been lying in the Police cell and had later vomited blood.

After receiving bail he had been admitted to the Mulleriyawa hospital by relatives and later was transferred to the National Hospital where he had died while receiving treatment.

The group dispersed after the Nugegoda ASP arrived at the location and assured the protesters that a comprehensive probe will be conducted.