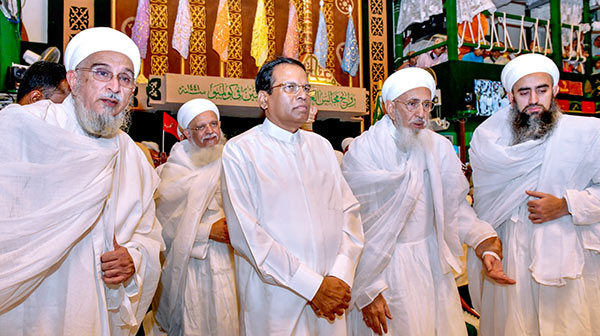 The country’s urgent need today is for everyone to join hands without communal or religious differences to dispel poverty and live in peace. This is also the essence of Prophet Mohammed’s teachings, President Maithiripala Sirisena told the World Bohra Convention yesterday.

The President visited the Bohra Masjid, Bambalapitiya, to extend his greetings to representatives of the global Bohra community at their global conference on its fourth day yesterday.

The President said the Bohra community was a community committed to peace and the holding of their conference in Sri Lanka was an honour bestowed on the country for which he is thankful for them.

A communique issued by the President’s media unit said nearly 21,000 Bohras from 40 countries were attending this year’s conference held on the theme “We believe in Sri Lanka”. Among them are nearly 18,500 of the community from around the world and nearly 2,500 Bohras from Sri Lanka.

This conference of Bohras committed to peace by eschewing extremism is aimed at strengthening Sri Lanka’s programme of promoting peace and confidence among all communities and religionists. It also aims to promote Sri Lanka as a conducive destination for tourism and trade.

The conference had so far brought foreign exchange earnings amounting to at least US$ 31 million to Sri Lanka, the presidential communique said. A similar conference was held in Sri Lanka in 2007 attended by nearly 7,000 Bohras. MP Faiszer Mustapha and acting IGP C.D. Wickremaratne also accompanied the President.