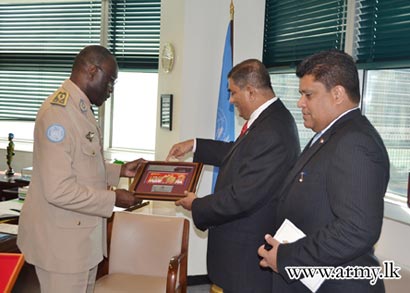 Lieutenant General Jayasuriya, Commander of the Army during his visit to the official headquarters of the United Nations as the first item on his agenda had one to one discussion with Lieutenant General Babacar Gaye, Military Adviser and UN Assistant Secretary for Department of Peacekeeping Operations.

On the sidelines of the UN meeting, the visiting Commander had a brief meeting with Sri Lanka’s Permanent UN Representative in New York Dr Palitha Kohona on the same day. Major General Shavendra Silva, Deputy UN Representative was also associated with this meeting.

MINUSTAH, a UN peacekeeping mission in Haiti that has been in operation since 2004 is composed of 8,940 military personnel and 3,711 Police and concentrates on assisting the Haitian National Police, maintenance of law and order, provision of humanitarian aid, community projects, etc.

As at present, a 950 strong Sri Lankan contingent is serving in Haiti for the MINUSTAH.