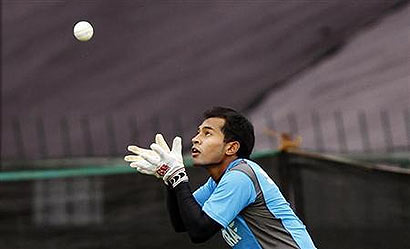 COLOMBO (Reuters) – Bangladesh skipper Mushfiqur Rahim is confident that his team can take advantage of a depleted Sri Lankan squad and secure a maiden test win over their opponents in the two-match series starting in Galle on Friday.

“Sri Lanka is a good team but it’s not impossible to win against them,” Mushfiqur told reporters on Thursday.

“Our younger players are coming through very well and we are very confident that if they put their hands up in the field we’ll have a competitive test series.”

Bangladesh has played Sri Lanka in 12 tests since 2001 and lost all of them.

Mushfiqur’s confidence is borne by the fact that their main tormentor of the past, off-spinner Muttiah Muralitharan, is not around to bamboozle their batsmen.

Muralitharan, who retired from test cricket in 2010 with a record haul of 800 test wickets, is the leading wicket-taker for Sri Lanka against Bangladesh with 89 wickets from 11 tests.

Sri Lanka are also without two of their experienced middle order batsmen, Mahela Jayawardene (injury) and Thilan Samaraweera, who announced his retirement from international cricket on Wednesday.

Sri Lanka will be led by a new skipper in Angelo Mathews, who will become the youngest to lead his country in a test match at the age of 25 years.

“The most important thing for us is to have a balance in the team with seniors and youngsters. I am sure the youngsters will take the opportunity and use it to the maximum,” Mathews said.

“Bangladesh are here to play some good cricket and we cannot treat them lightly.”

The good news for Sri Lanka is that top-order batsman Kumar Sangakkara has been declared fit and will play his first competitive match in almost three months.

Sangakkara suffered a fracture on his left index finger when he was hit by a ball from Australia fast bowler Mitchell Johnson during the Boxing Day test in Melbourne and has been recovering from the injury since.

The only other experienced batsman in the side, which is filled with youngsters, is opener Tillakaratne Dilshan.

With Dinesh Chandimal taking over the wicketkeeping position from Prasanna Jayawardene for the series, the number seven spot in the lineup has become vacant for either a batsman or an all-rounder.

Uncapped test players Kithruwan Vithanage and Jeevan Mendis are vying for that spot.

Left-hander Vithanage scored a career best 168 not out off 165 balls for Sri Lanka Development XI in the three-day warm-up game against Bangladesh at Matara last week, and leg-spinner all-rounder Mendis has been part of the ODI team.

The pitch at Galle is favourable for spin and Sri Lanka are likely to go with two spinners, Rangana Herath and either Ajantha Mendis or uncapped Tharindu Kaushal, with Dilshan playing the role of a third spinner. (Reuters)