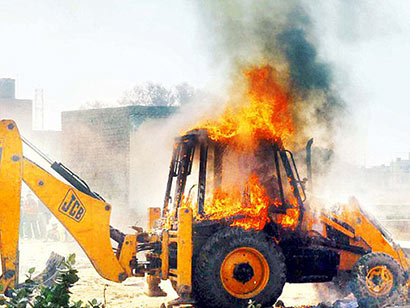 Two excavators and a tipper truck which were parked in the Wilgamvehera area on the Trincomalee-Anuradhapura main road, where a reservoir in being built, have been set on fire and destroyed along with other machinery by a group of persons, police said.

A group of seven individuals had arrived at the location last night, assaulted and tied up the security guard stationed there to safeguard the equipment before carrying out the act of arson.

Uppuveli Police and the Navy’s fire brigade managed to douse the fire, however the tipper truck and machinery have been completely destroyed.

The damages caused by the fire have been estimated at around Rs 9.5 million, police said.