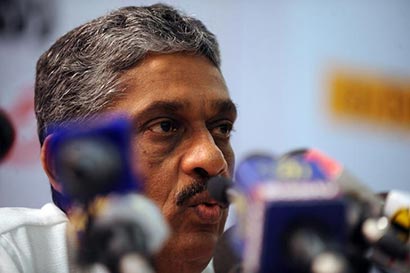 Accusing President Mahinda Rajapaksa’s government of failing to counter the growing threat on the human rights front in Geneva, Democratic Party Leader General Sarath Fonseka yesterday said that there was absolutely no basis for allegations directed against the military.

However, the observations and the recommendations made by the Lessons Learnt and Reconciliation Commission (LLRC) appointed by the President had aggravated the situation, the outspoken General said.

Addressing the media at party office at Kotte, Sri Jayawardenapura, the former Army Commander and Chief of Defence Staff said that his troops hadn’t been responsible for rights violations during the final phase of the conflict. Commenting on specific allegations regarding mass rape of surrendered LTTE women cadres, the war veteran insisted that it was nothing but a lie.

Gen. Fonseka said that the country was at the risk of being isolated internationally due to failure on the part of the incumbent administration to address issues raised by those wanting to haul Sri Lanka up before an international war crimes tribunal. The US had changed its position on post-war Sri Lanka, Gen. Fonseka said,  adding that the second US resolution on Sri Lanka at the ongoing UNHRC sessions would reflect the hardening of their approach. India, too, was now likely to go against Sri Lanka, the former army chief said. Although government leaders had been boasting of a counter offensive in Geneva, they did nothing but running away when UNHRC Navy Pillay called them for a meeting.

The Gen. alleged that the Sri Lankan delegation wouldn’t have shunned HR chief Pillay’s invitation without consulting the President. Commenting on a section of the international community calling for shifting Commonwealth Heads of Government Meeting (CHOGM) in Sri Lanka later this year, Gen. Fonseka alleged major Commonwealth countries were opposed to Sri Lanka’s being the venue.

Responding to a query, the war veteran said that those who had been found guilty of violations in various parts of the country, including the northern and eastern provinces were dealt with throughout the conflict. An irate General Fonseka said that as the Commander of the victorious Sri Lanka Army he was ready to respond to various allegations made by a section of the international community. The defeated Presidential candidate said that it was his responsibility to speak on behalf of the country, the people as well as the army regardless of what the government said. The army, Gen. Fonseka said was disciplined during his tenure as the Commander, though allegations were now directed the service.

The country was in severe turmoil due to waste, corruption and irregularities in the public sector, the Democratic Party leader said. The Sinha Regiment veteran said that people were struggling to make ends meet while those in power squandered taxpayers’ money. Gen. Fonseka claimed that the Chinese government, too, had now identified the risks involved in funding the Sri Lankan regime.

The former army Chief asserted that China’s recent refusal to fund some project and on another instance demand insurance cover reflected that country’s growing concerns.

Asked whether he was confident of securing political recognition for his party soon, the General said that since his release from prison he was able to take up the issue with relevant authorities, including the human rights commission. The Gen. said that the Democratic Party had recently received an invitation from Elections Commissioner Mahinda Deshapriya for a meeting to next Tuesday (Feb 12) which could pave the way for political recognition. The Democratic Party had been engaged in politics for some time and the forthcoming meeting with the polls chief would give him an opportunity to explain the situation. The General expressed confidence that the polls chief would do the right thing.