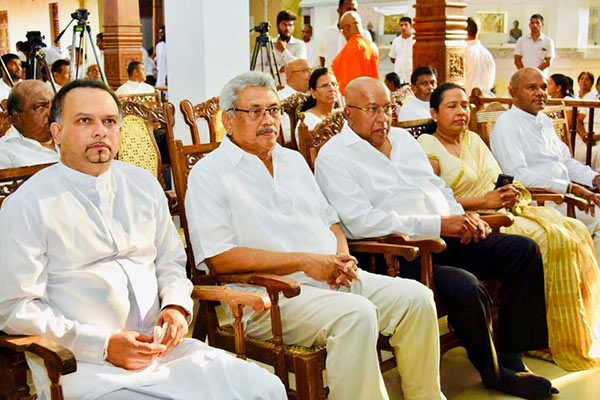 Former Defence Secretary, on Wednesday (20), told a gathering at Gauthama Viharaya, Narahenpita that Speaker Karu Jayasuriya was seeking to be UNP candidate at the 2019 presidential election.

A smiling Rajapaksa, told Plantation Minister Navin Dissanayake, present on that occasion that the latter’s father-in-law was a presidential contender.

Rajapaksa said so in response to Navin Dissanayake, who, in his address to the gathering called Gotabaya Rajapaksa as the future Opposition presidential candidate. Minister Dissanayake emphasized the pivotal importance of suitable persons given appropriate positions.

Navin Dissanayake recalled the assassination of his father, Gamini, in Oct 1994 at the age of 52 at a UNP rally at Thotalanga. Navin Dissanayake said that today (March 20) was his 77 birth anniversary.

Suicide blast triggered by an LTTE cadre claimed the lives of about 50 persons, including several lawmakers and the then General Secretary of the party Dr. Gamini Wijesekera.

Dissanayake said that Rajapaksa was much older than his father when coming forward as presidential candidate.

The minister said that they didn’t know what the future held for them.

Gotabaya Rajapaksa thanked Dissanayake for introducing him as the future presidential candidate.

At that the conclusion of the event, Gotabaya Rajapaksa told the media that he was going ahead with campaign with the backing of the Sri Lanka Podujana Peramuna (SLPP).

Responding to a query, Rajapaksa declared that he was the best choice to re-build the country and even the minorities realized that.

Meanwhile, Joint Opposition Leader in parliament Dinesh Gunawardena, MP told media briefing at the Sri Lanka Foundation (SLF) that Speaker Karu Jayasuriya was eying presidential candidature. MEP leader said so when the electronic media asked him to comment on his name too being speculated as a possible candidate. Gunawardena said that several names were being mentioned. The JO heavyweight also referred to the second round of talks between the SLFP and the SLPP taking place to decide on a future course of action. MP Gunawardena faulted the SLFP for failing to vote against budget 2019 at the second reading on March 12.

During the question and answer session, MP Gunawardena also flayed Speaker Jayasuriya over his conduct during the 52-day constitutional crisis that ended with Prime Minister Mahinda Rajapaksa giving up office after failing to prove a simple majority in parliament.

Gunawardena alleged that Karu Jayasuriya had caused unprecedented crisis by not following Standing Orders throughout the crisis. The JO parliamentary group asked whether those who had demanded the UPFA proved its simple majority in parliament during the crisis could do so yet. Recalling how 122 lawmakers had moved court against the dissolution of parliament, MP Gunawardena pointed out the UNP was yet to show 113 members.