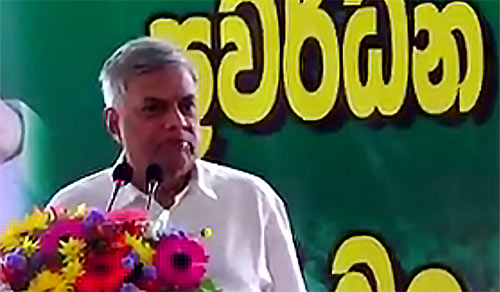 Prime Minister Ranil Wickremesinghe said yesterday the government was working towards introducing a pay hike to the working class, and also to provide employment opportunities to the youth.

Addressing the UNP membership drive and the appointment of the Youth Bala Mandala in Biyagama yesterday, he said the government would provide employment opportunities to the youth through 50 industrial zones in the country.

Meanwhile, the Premier stated that the UNP, which will celebrate its 70th anniversary, would adopt the concept of its late leader J.R. Jayewardene as its future strategy.

“Late J.R. Jayewardene rallied the youth and gave them a place in the party. I was one of them. He appointed me as the Biyagama Organiser. He advised me to look for means to develop the area, for which I suggested that he set up an industrial zone in Biyagama, like the one in Katunayake.

However, it did not remain as a mere suggestion, but was materialized. Thus, Biyagama was developed,” he said.

Mr. Wickremesinghe added that it was the duty of the present Biyagama Organiser Ruwan Wijewardene to find channels to bring in IT developments to the area and ensure further expansion.

However, he said concessions would be given to people once the government resolved a few issues such as controlling the cost of living. He also assured a nation with a stable security situation.