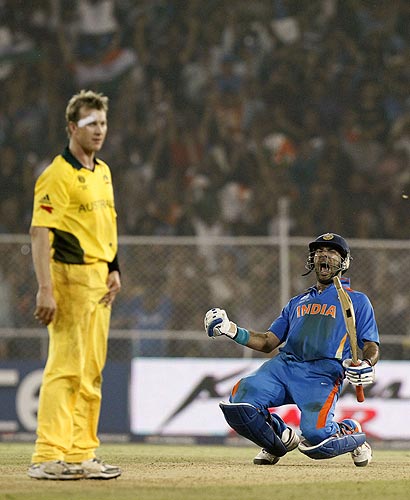 NEW DELHI (AFP) – India swept three-time defending champions Australia out of the World Cup on Thursday to set up a semi-final showdown against bitter rivals Pakistan and heap more pressure on Ricky Ponting.

India’s five-wicket triumph in Ahmedabad means they will tackle Pakistan, who reached the last four with a crushing 10-wicket win over the West Indies, in Mohali on March 30.

But Ponting was left battling to extend his nine-year reign as Australia one-day captain despite the 36-year-old hitting a composed 104 in his team’s below-par 260 for 6.

Brad Haddin made 53 and the recalled David Hussey pitched in with an unbeaten 38 off 26 balls.

Yuvraj Singh then hit 57 not out — his fourth fifty of a tournament where he is averaging over a hundred — to see India home with 14 balls to spare.

Sachin Tendulkar missed his chance to clinch a landmark 100th international century but his 53 was crucial as was Gautam Gambhir’s 50.

“India v Pakistan semi-finals – it doesn’t get any better. The pressure will be big, but in reality it makes no difference to us,” said India skipper Mahendra Singh Dhoni.

“I’d have been satisfied keeping Australia to 250, but we had our best fielding unit today. I think we saved around 15 runs that we didn’t need to chase.”

Ponting, who went into the match with senior Cricket Australia officials reportedly keen for a change in leadership of the team, said his side let themselves down.

“With 15 overs to go, it was touch and go, but Yuvraj and Suresh Raina (34 not out) played really well. It’s disappointing to bow out. We are a better team than that.”

But he was characteristically defiant when asked if he was calling time on his international career.

“What did I tell you the other day? Nothing’s changed,” said Ponting.

Pakistan coach Waqar Younis said he is relishing the prospect of playing the last two matches in India to win the World Cup as his team continued their ruthless march.

Pakistan, led from the front by inspirational captain Shahid Afridi, crushed the West Indies by 10 wickets in Dhaka on Wednesday to advance to their first semi-final since 1999.

Waqar said it will be “awesome” to take on India for a place in the final at the Wankhede stadium in Mumbai on April 2.

“There is no bigger rivalry in the game than that. We have not played each other in our own country in recent years,” he said.

“So it should be very exciting. The two are cricket-loving countries.”

West Indies coach Ottis Gibson threatened his senior players with the axe after their humiliating defeat.

“We are very very disappointed with our performance,” the coach said. “It’s a fact that our senior players have not performed. When the going got tough we did not stand up to it.”

The third quarter-final will be between South Africa and New Zealand in Dhaka on Friday with Sri Lanka hosting England in Colombo on Saturday.

The 30-year-old Sussex left-hander, who played in three matches at the tournament, said he felt he had no option but to return home.

He will be replaced by Adil Rashid.