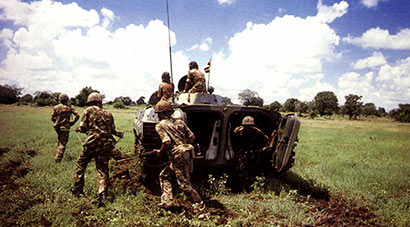 In 2013 Indian Prime Minister decided to vote against Sri Lanka in Geneva because of India’s concern for the ‘dignity” and ‘self-respect’ of Sri Lankan Tamils. In 2014 that changed to India not wanting to hurt Tamil sentiment before elections (Indian elections). But what did India do to the ‘self-respect’ ‘dignity’ of these Tamil women from 1987-1990 during the 3 ½ years when Indian Army (IPKF) were raping up to an estimated 4000 or more Tamil women, killing and looting the entire Northern peninsula so much so that they became known not as the Indian Peace Keeping Force but the Innocent People Killing Force. With India so concerned about accountability we think it opportune that investigations MUST cover India’s war crimes in Sri Lanka.

In what can be described as a rehearsal or a prelude as to what Sri Lanka’s Tamils can expect falling prey to the bogey of being concerned for the Tamils, India is using this as a slogan to fool Sri Lanka’s Tamils in a bigger quest to annex Sri Lanka’s North to India in a bid that meets approval by the West for India is all but in their pocket. An annexed North Sri Lanka would mean a bonus for both India and the West in terms of their own geopolitical interests but it would be a greater achievement for the West who are drawing up plans to balkanize India and run breakaway new states through their puppets.

Having said that we return to the issue of War Crimes and the hyped up ‘international investigation’ calls with India pretending it had no part to play in creating the LTTE. Having trained Tamil youth in India, India today pretends it had nothing to do with what LTTE monster did eventually. Thereafter, LTTE having killed India’s own Prime Minister, the Indians still has no remorse about continuing ties with the LTTE but pretending to the world it did not. If India is suffering amnesia which we think it is, it is no better a time to unearth India’s dirty past and the claims of rape are not by Sinhalese but by Tamils themselves.

“I was shocked, saddened and angered when I read the news item on 17 March 2004 in Sri Lanka Media, that a memorial is to be erected in Colombo for the Indian Peace Keeping Force – IPKF soldiers who died in Sri Lanka between 1987 and 2000. The simple fact of the matter is that a foreign country, with designs of becoming a regional superpower, maneuvered to send its Army here as Peace Keepers but massacred thousands of innocent Tamil civilians, raped the women and plundered valuables.If memorials are to be erected, then it should be for innocent civilians massacred by the IPKF.”

Then there is the Amnesty International report

“Several dozen Tamil women, some of whom needed hospital treatment, testified that they were raped by IPKF personnel. A local magistrate in the north reportedly found the IPKF had been responsible for seven cases of rape in December.” – Amnesty International Annual Report, 1988 for period January to December 1987

“The Indian Army has court martialled four of its men serving in the Jaffna peninsula for rape, a senior Indian military officer said here yesterday…He also conceded that several complaints of theft had been made against Indian soldiers. ‘The Indian army are not angels. We are not devils either. We are just human’ Brigadier Kahlon said when pressed for details. ‘Rape happens even in the West’.” – Sri Lanka Sun, 15 January 1988

Many female bodies were found inside Ashok Hotel where IPKF were occupying along with Tamil paramilitaries working for the Indian army.

Even the Indian Sunday Observer carried details of IPKF rape, murder and looting

“A number of Indian soldiers face dismissal from military service besides rigorous imprisonment for committing excesses, including raping of women and looting of civilian property while deployed for peace­keeping role in Sri Lanka, it is learnt.

So far, the government (INDIAN) had denied that the IPKF soldiers had committed any excesses. The denials came in the wake of allegations by human rights organizations, including Amnesty International, a few months ago. The instances were kept under wraps by the army authorities who, however, did initiate punitive action against the guilty. But legal experts feel that the manner in which the army has handled the whole issue raises vital points of law which may not stand the scrutiny of Indian law courts later.

The most serious case relates to an incident which occurred on November 21, 1987 near Trincomalee when Naik Baldev Singh of the 270 Engines a’ Regiment ran berserk and killed seven civilians and injured another four by indiscriminate firing from his services rifle. He committed this crime following the death of his brothers law during a combing operation the previous day.”

“The Indian Army has court martialled four of its men serving in the Jaffna peninsula for rape, a senior Indian military officer said here yesterday…He also conceded that several complaints of theft had been made against Indian soldiers. ‘The Indian army are not angels. We are not devils either. We are just human’ Brigadier Kahlon said when pressed for details. ‘Rape happens even in the West’.” – Sri Lanka Sun, 15 January 1988

Section 124 of the Indian Army Act provides that ‘Any person subject to this Act who commits any offence may be tried and punished for such offence in any place whatever’ – this clearly establishes that in the even an investigation is held against Indian War crimes in Sri Lanka, Indian army can be charged and court martialled in Sri Lanka itself.

A handful of actions had to be taken in view of the public outrage. That India took action depicts the nature of the rapes that would have taken place pressurizing the Indian Government to take action.

The charges against Indian Army soldiers include rape, sodomy and looting of civilian property.

Latur Lal and Babu Lal of 12 Grenadiers had raped a married woman at Karavedi during Operation Pawan on 27 May 1988.

A Mani, a barber of 93 Field Regiment raped an unmarried woman near Kodikaman 24 Dec 1987

Havildar Badan Singh of the infantry brigade committed sodomy on 4 male activists of LTTE in Jan 1988 during detention.

Numerous other jawans have also faced charges of indulging in sexual relations with women while frisking them at Vishwamadu village 11 April 1988 during Operation Viraat. The court of inquiry however claimed that the 4 complainants were ‘women of easy virtue’ and their grouse was that they had not paid for their services!

With India tagging behind the West foolishly thinking India is being treated on equal terms tries to hide its own skeletons it is time that the Sri Lankan Government cease being the good neighbour for we see no reciprocation from the Government of India despite many Indians openly making their positions clear that India should refrain from antagonizing neighbors.  Yet, we have a history of antagonism as well as covert operations by India and what gets everyone in Sri Lanka upset is because India is attempting to hide its own role in creating the LTTE monster. An investigation of this would also help us discover if this chapter had the influence of Western elements as well given Indian-UK links to the attack on the Golden Temple.

However, with the US and Allies so concerned about ‘Accountability’ it is no better a time than now that the world came to know OFFICIALLY how India took groups of student Sri Lankan Tamils to India and trained them on handling arms, gave them money and provided them intelligence on how to attack and who to attack and that is the beginning of the LTTE story – it had nothing whatsoever to do with 1983 riots because the training of these Tamil youth in India started well before 1983. There are many historical gaps that need to be cleared and in deed an investigation into India’s War Crimes in Sri Lanka is a good start for arming terrorists goes down as state funded terrorism which is prohibited under UN.