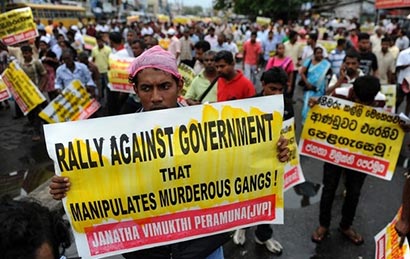 Julampitiye Amare, an underworld figure wanted for the murder of two psrticipants at a JVP political meeting at Katuwana in the Hambantota electorate surrendered to the High Court Tangalle while opposition political parties and international human rights organizations were criticizing the Sri Lanka government for protecting the murderers.

Tangalle High Court Judge Chandrasena Rajapaksa told Geeganagamage Amarasiri, alias Julampitiye Amare, the accused assassin  who surrendered to Court through a lawyer, to ask his henchmen too to surrender with their weapons.

Julampitiye Amare, who the JVP accused of organising last Friday night’s Katuwana double murder, surrendered to the Tangalle High Court through his counsel, attorney-at-law Nishantha Sandabarana, the former Deputy Chairman of Sri Lanka’s ruling political party of the Tangalle Urban Council. The Judge ordered that Julampitiye Amare be remanded until the next day.

The JVP accused Julampitiye Amare came with seven other colleagues on motor bikes and pointblank started spraying bullets on the unarmed participants of the political meeting of their party killing two and injuring scores of others. Within one and half  hours  of the incident Lakshman Hulugalle, Director General of the Media Center  for National Security came up with a story that the factions who left the JVP are responsible for the incident. The JVP said Hulugalle’s statements were highly suspect as by that time no investigation was complete. The JVP accused the government was trying to cover-up the murders. They said since the place where the murders took place is very close to Medamulana Walawwa, the ancestral home of the Rajapaksases, where there is high security the possibility of a gang on motorbikes armed with automatic weapons without the knowledge of the authorities was highly unlikely, they charged.

Tylvin Silva Secretary of the JVP said, “Eye witnesses at the scene have given statements to the police with names and details of the persons who  had carried out the attack and it is now up to the police to enforce the law.”

An accused assassin has surrendered to the courts on a warrant issued for a different criminal case in which he is accused of.

The following is the statement issued by the Asian Human Rights Commission regarding the controversial police investigations: Two persons were killed and several others were injured attending a JVP meeting on 15th June. This has once again reminded the country of the system of political terror which has undermined the political and legal system. The killing was the result of shots fired by motorcyclists, who fled after the incident and according to the JVP, the shooting was carried out by an underground element. The JVP believes that it was a political assault for which the government is responsible.

What has created the suspicion about the government’s involvement is the media version given by some channels immediately after the attack which said that it may have been caused by break away rival groups of the JVP itself. The spokesmen for the police also tried to give this interpretation, even though there was no evidence at all to back it up.

Whenever the government is involved in a political attack it is a common feature to attempt to attribute such attacks to some other sources. In a country where political terror is so deeply entrenched, committing and attributing the blame on various groups and elements is now the norm.

The JVP has stated in public that they have provided sufficient information which should enable the arrest of the culprits. However, the police claim that there is not enough evidence to rely on and that they are investigating the matter through several investigating teams.

Making claims about ongoing investigations is also a common feature in Sri Lanka after political attacks. However those investigations hardly ever lead to any genuine arrests. Indeed, there are so many cases where for years the investigations are said to be on going but no findings have been made. The cases of Lasantha Wickramatunga, Pradeep Eknaligoda and many others relating to journalists and people representing opposing views to the government are quite well known.

On the other hand, when it comes to the people who are friends of the government, such as Duminda Silva, the police investigators do everything they can do to ensure the protection of these culprits. President Mahinda Rajapaksha and the defense secretary Gotabaya Rajapaksha should take the blame for the state of the prevalence of state of the terror in the country and for the failures of the police investigations.

This killing of people who are faithfully participating in a small political gathering in a peaceful manner is a warning of another round of terror that is being ushered in. That the JVP is the target being relentlessly pursued by the government is no secret.  These attacks have happened over and over again and it is quite likely that there will be many more of them. 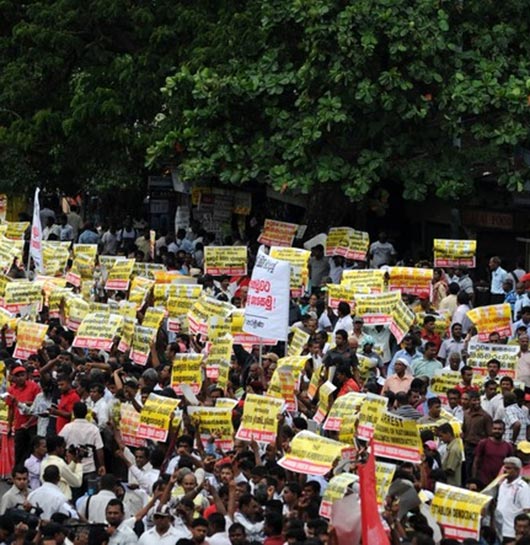