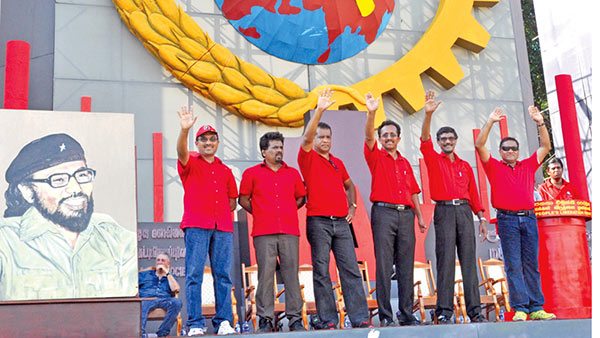 Financial records of eight political parties released by the Elections Commissioner through a RTI request put forward by Transparency International Sri Lanka (TISL), has shown the Janatha Vimukthi Peramuna (JVP) to be the most financially secure and asset rich party among the main political parties. TISL has released financial records for the parties; JHU, SLMC, JVP, SLFP, UNP, CWC, ITAK and UPFA.

According to the financial statement released on the TISL website, the JVP had earned a total income of Rs 87,196, 322 as of 31 December 2015. Their main source of income is derived from the JVP practice of having all its members in Parliament, local government and provincial councils donating their salaries to the party. Though the expenditure for that year stood at Rs 79,230, 583, the party managed very well to be left with a net income of Rs 22, 080, 056. It has also declared assets worth Rs 190,318,056.

Interestingly the party’s records also show that MPs contributions through the sale of their vehicles was also a major source of income to the party, with the party raking in more money, in the years where their MPs contributed from such a sale. In 2015, they earned Rs 10,900,000 from the sale of MP vehicles and in 2013, they earned, Rs 24,825,000 from it. These were profitable years for the party while in 2014, their income dropped as there was no income from MP vehicles.

The CWC, another resource rich party had donations from many quarters; with its member subscriptions making up its main source. Its total income in 2015-2016 was recorded at Rs 115,611,663 while in 2014-2015 it had collected a total income of Rs 132,770,125. The auditors here noted that there were certain discrepancies in the member subscription fees of the CWC and the party had failed to provide them with a complete list of members and how much they had contributed ,for audit purposes. The JHU with its minimalistic accounting, showed that as of 31 December 2015 it had a net income of Rs 1,851,133, with a total income being Rs 4,297,948. It was interesting to note that Minister Champika Ranawaka’s ‘salary donations’ of Rs.213,880 was listed as one of the main contributions to the party’s income.