New President to be sworn in today 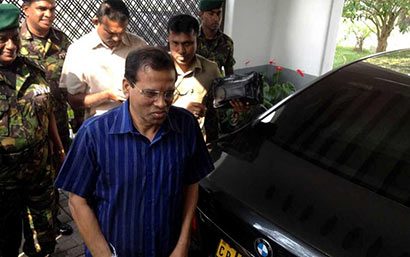 Mr. Maithripala Sirisena is to be sworn in this evening as the new President of the Democratic Socialist Republic of Sri Lanka, leader of the Opposition Ranil Wickremesinghe said.

Speaking at a media briefing, Wickremesinghe said that he met with President Mahinda Rajapaksa early this morning, and the President had conceded his defeat.

He also said that President Rajapaksa had spoken to Mr. Sirisena and spoken of a smooth transition of power.
Mr. Wickremesinghe urged all parties to not to partake in any act of violence, and said that he had spoken to the Inspector General of Police, and requested to take stern action against any individual who was found guilty of breaking the law.

“There can be no revenge or vengeance. The law should and will be strictly enforced against any person who indulges in any act of violence” he said.

2 Responses to New President to be sworn in today

Home » New President to be sworn in today