No clear answers from SLC! 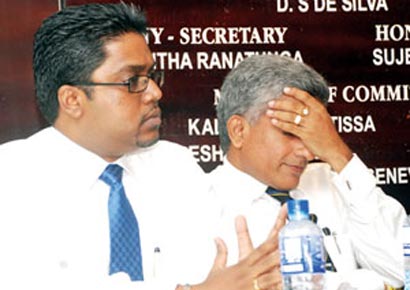 Sajeewa Rajapakse, Treasurer, Sri Lanka Cricket who has been an employee of SLC for the last six years, stated that this is the first time that SLC has sought a government grant to settle their debtors. Rajapakse said so at a media briefing held by SLC to respond to recent negative reports published in the media.

Two hours into the briefing, all Sri Lanka Cricket officials walked off, skipping many questions posed by mediapersons.

During the briefing Rajapakse said that, “I have been working almost six years at SLC, but this is the first time that SLC is seeking a government grant.”

Rajapakse who went to great lengths to explain the current financial situation stated that Sri Lanka Cricket owes US$13 million to the Bank of Ceylon, US$3.5 million to the ICC and Rs. 220 million to subcontractors who were involved in the construction of the World Cup venues.

He further stated Rs. 4.4 billion was spent to build three World Cup venues, while the original estimate was Rs. 3.2 billion.

However, Rajapakse denied that SLC is facing a financial crisis. He added that one or two tours by India will enable SLC to settle the outstanding amounts.

He also agredd that the salaries of SLC staff for the month of May was delayed by two days. He attributed this to an adminstrative oversight.

The local media reported that staff wages were held up for want of Rs. 22 million and SLC had to seek a government grant to pay the wages of the employees.

Meanwhile, Eshana De Silva, Acting Chairman, Interim Committee, Sri Lanka Cricket, said that, “there is investigation in progress egarding the Rs. 14.9 million bonus payment for SLC staff and according to Eshana De Silva, investigators have been asked to ascertain as to who granted approval for payment of the bonus.

Home » No clear answers from SLC!