No room for violation of Constitution and country’s independence 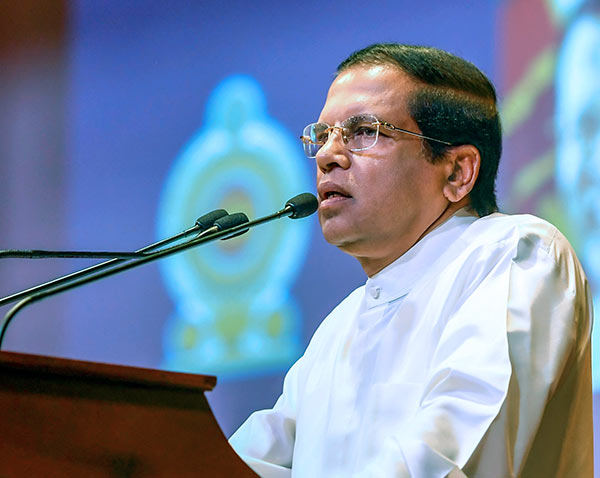 President Maithripala Sirisena yesterday stressed that he would not implement any decisions that would violate the country’s Constitution and independence at the whims and fancies of the international community or any other persons.

The President commenting on UN Human Rights Chief Michelle Bachelet’s proposal to set up a special commission with regard to the release of lands held by Security Forces in the North and East, said there is no need to appoint such commission.

He said the UN Human Rights Chief has made this proposal based on false information given by Non Governmental Organisations.“The Government is always prepared to admit what is right in the statements issued by the UNHRC. But it will never accept inaccurate information in such statements,” the President added, speaking at an event held at Meegahatenna in Kalutara yesterday.

“Wrong decisions taken by some quarters of the country have led to this incident. I see this as a betrayal of Security Forces, the Government and the people of the country.” The President stressed that he has the responsibility over the country’s foreign policy, international affairs and relations adding that the country’s delegation to the UNHRC was nominated without consulting him.

“I decided to change the delegation that was to represent Sri Lanka at the UNHRC after the incident that took place on February 25,” he noted. President Sirisena added that he gave instructions to Foreign Affairs Minister Tilak Marapana to deliver his speech at the UNHRC session to better reflect the stance and needs of the country.He stressed that no foreign force will be allowed to rule the country, though the country needs sound foreign relations.

Home » No room for violation of Constitution and country’s independence