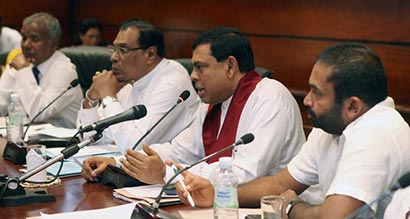 The Government has decided to give 51, 420 graduates currently undergoing training in the State Sector permanent appointments next year in accordance with regulations pertaining to Development Service Officers. All arrangements have been made to assign them as graduate trainees to ministries and departments by the 30th of this month.

This is the first time that a government is absorbing the highest number of graduates to the State Sector with the objective of strengthening the public service by obtaining their services to meet people’s needs at national and regional levels for accelerated development. The highest number of graduates (6,549) has been recruited from the Kurunegala District for this programme which is being implemented under the guidance of President Mahinda Rajapaksa. Among them are 414 Buddhist monks who will fill vacancies in the Education Ministry and other institutions.

The above was revealed at a conference of secretaries of all ministries, heads of departments and government agents presided over by Economic Development Minister Basil Rajapaksa and Public Administration and Home Affairs Minister John Seneviratne on November 2. Also participating were Telecommunication and Information Technology Minister Ranjith Siyambalapitiya, Agriculture Minister Mahinda Yapa Abeywardana and Public Administration and Home Affairs Deputy Minister Vijaya Dahanayake and the Ministry Secretary, PB Abeykoon.

The graduate trainees who were recruited early this year are being paid an allowance of Rs.10, 000 per month. Different ministries, departments, boards, corporations and other statutory bodies had made requests for the number of graduates each of them required in the relevant fields. The highest number of graduates (16,478) has been assigned to the Economic Development Ministry. They have already taken up assignments in 14,008 grama niladari areas in 324 secretarial divisions of Sri Lanka’s 25 districts to strengthen the rural economy on the advice of Economic Development Minister Basil Rajapaksa.

In giving permanent appointments to graduate trainees proposals for formulating a system to absorb diploma holders currently working as trainees and those recruited after December 31, 2011 (year of awarding degrees) will be presented to the government by the committee appointed for the purpose.

The main objective is to obtain the services of graduate trainees for the country’s development programs and get them act as liaison officers between the rural population and the government. For this purpose the Local Government and Provincial Councils Ministry has assigned a large number of graduate trainees to all Provincial Councils in the country in accordance with their requirements. In the Kurunegala, Kegalle, Batticaloa, Jaffna, Ampara, Matara, Galle, Hambantota, Kandy and Ratnapura Districts where graduate trainees are in excess, they will be assigned to other nearest districts.