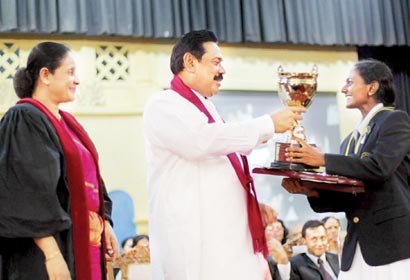 President Mahinda Rajapaksa graced the annual prize giving ceremony of Visakha Vidyalaya, one of the oldest Buddhist prestigious girls’ schools in Sri Lanka which was held at the school premises on Friday 04 November.  The President participated the ceremony as the chief guest. He was warmly welcomed by the Principal of the school, Mrs. Sandamali Aviruppola at the school’s main gate and later was guided to the school main hall from a colourful procession headed by school Western and Eastern music bands.

Addressing the prize giving ceremony, President Rajapaksa said that the future of the country belongs to the younger generation and they should act responsibly when they grow, preserving the country’s good name. It is every citizen’s responsibility to protect the good image of the country. Worthy citizens don’t run down or tarnish the image of their country abroad. Making statements condemning one’s own motherland abroad, was not a feature of a worthy citizen. He made this observation speaking at the prize giving 2010 of Visakha Vidyalaya, Colombo.

President Rajapaksa further added Sri Lanka is among the top countries that facilitate and protected to women a good position in the society, according to international research. He added that most developed countries are far behind Sri Lanka in this regard. He said that Sri Lankan women make a significant contribution to the national economy and they are equally doing well even in tertiary education. He added that women should also be well prepared to shoulder the responsibilities of society.

Pictures are seen here Mahinda Rajapaksa awarding the Best Student of the Year trophy and the certificate for year 2010 of Visakha Vidyalaya to Yasasi Thrinda Perera at the annual prize giving while Visakha Vidyalaya Principal Sandamali Aviruppola looks on. The Principal also presented a memento to the President to mark the occasion.

Visakha Vidayalaya, began 94 years ago in 1917 under the name of “Buddhist Girls’ College” in a house called “The Firs” at Turret Road, Colombo, Sri Lanka. It was moved to its present premises at Vajira Road on the 21st of November 1927 and named “Visakha Vidyalaya” by Lady Herbert Stanley, the wife of the then Governor of Ceylon. From humble beginnings, Visakha Vidyalaya has risen to the present glorious and prestigious position of the most sought after school for girls in Sri Lanka. Furthermore, it is the only girls’ school identified amongst the first National Schools in the Island.