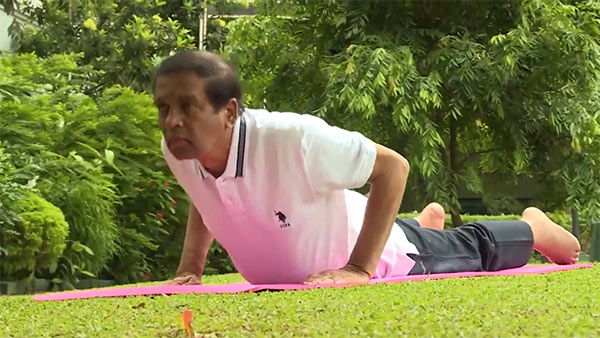 On the occasion of International Yoga Day, Sri Lankan President Maitripala Sirisena praised Prime Minister Narendra Modi for his efforts to bring the “common heritage” of India and Sri Lanka to the international stage.

He also urged everyone to practice yoga.

“I compliment my friend @narendramodi for his efforts at bringing our common heritage of Yoga to the international stage. I urge all to practice yoga like me,” he tweeted.

Sirisena also shared a video in which he could be seen performing various asana including Vriksasana and Bhujangasana.

The idea of International Day of Yoga was first proposed by Modi during his speech at the United Nations General Assembly (UNGA) on 27 September 2014.

“We consider Yoga as a form of meditation. There are similarities between instructions inspired by Buddhism for conducting a healthy life,” he said in Sinhalese.

“Daily workouts, meditation and Ayurvedic practices are of extreme importance to live a happy and blissful life,” he added.

“Thank you President @MaithripalaS for your support towards making Yoga more popular. Also glad to see you share your own experience of practising Yoga,” Modi tweeted.

The International Day of Yoga is being celebrated annually on June 21.

The first International Day of Yoga was observed all over the world on June 21, 2015, when over 30,000 people including Prime Minister Modi performed yoga at the Rajpath in New Delhi.