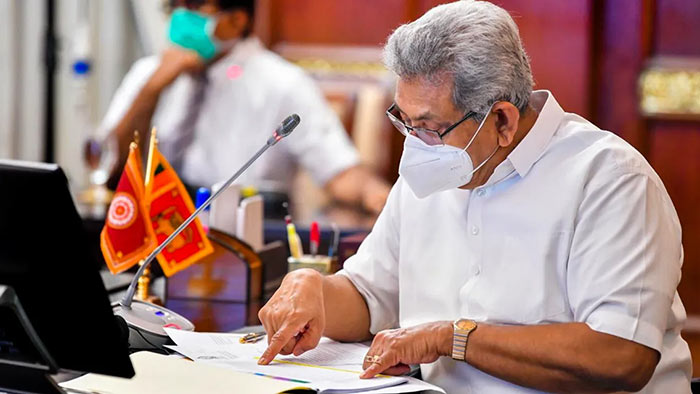 It has been established under the powers vested in the President by the Constitution.

The Task Force is responsible for reviving the economy and eradication of poverty while paying special attention to the challenges posed and opportunities emerged in Sri Lanka in the wake of COVID-19 outbreak.

Based on the vision of the “Saubhagyaye Dekma”, policy statement, the Task Force should steer the relevant institutes to create a production economy through the formulation of a unique economic structure based on novel initiatives.

Implementation of joint operations to establish a people-centric economy which will promote domestic industrialists and entrepreneurs is another objective of the Task Force.

It has also been tasked with the responsibility of taking measures to distribute products in liaising with all the institutes while paying attention to the activities undertaken by the health and education task forces to maintain normalcy in the civilian life.

The Task Force is required to  inform the President of all instances where any public official, Ministry, State Department, State Corporation or any other similar institute which delays or fails to  perform duties and responsibilities assigned by it.

Relevant provisions relating to the Task Force appointed on January 24, 2020 and March 24 on Poverty Alleviation and Livelihood Development and the Presidential Task Force appointed on March 23, 2020 on administration of essential services to continue civilian life which have been identified as high risk zones in the face of COVID-19 spread will be abolished with the establishment of the new Task Force.

The scope and the responsibilities of the Task Force in charge of Economic Revival and Poverty Eradication will be announced in a gazette notification to be published soon.

Special representative of the President Mr. Basil Rajapaksa will chair the task force while additional secretaries to the office of the Prime Minister Mr. Anton Perera and D. S. Jayaweera will function as co-secretaries.

Following is the complete list of members of the Task Force: