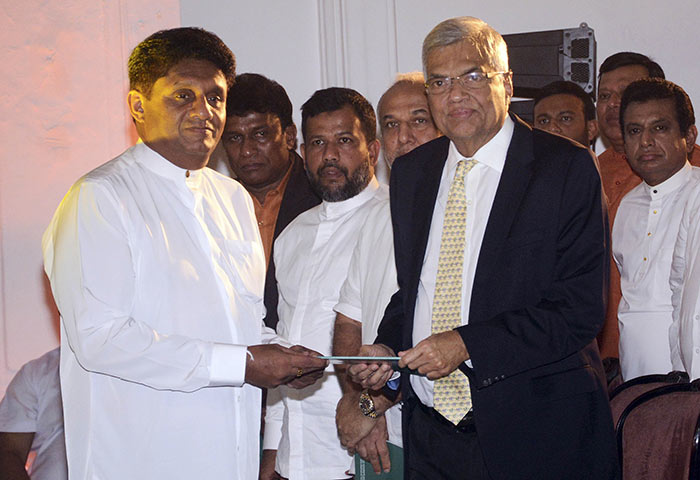 His platform says the new laws will allow better monitoring, investigation and prosecution of religious extremists, and will provide severe penalties for hate speech and misinformation.

“The defense budget will be enhanced to prioritize modernization of the intelligence agencies, police and security forces in line with the National Security Strategy,” the platform said.

“Included in the modernization of the police force will be a fresh policy on promotions that will reflect merit and recognize the value of officers who are dedicated to their duty in pursuing challenging, dangerous and important criminal cases,” the document said.

A position of national security adviser will be created by law and a Counter Terrorism Center will be established linking all relevant agencies, it said.

National security in the aftermath of deadly Easter Sunday bomb attacks has taken prominence in the election campaign as it enters the final two weeks.

Sri Lankan authorities are accused of not having acted on near-specific intelligence warnings ahead of the attacks.

A parliamentary committee appointed to investigate the attacks said the country’s spy chief, Nilantha Jayawardena, should take a large portion of the blame because he received information on possible attacks as early as April 4, 17 days before they occurred, but he delayed in relaying the reports to other agencies and the military.

The voting will take place Nov. 16, with Premadasa and former defense official Gotabaya Rajapaksa seen as the leading candidates.

Rajapaksa has said he will order a new probe into the blasts and won’t recognize an agreement the government made with the U.N. Human Rights Council to investigate alleged war crimes during the nation’s civil war.

Meanwhile, election chief Mahinda Deshapriya warned that voters who share images on Facebook of their marked ballots will be sent to prison for up to three years.

Deshapriya said some people who were casting postal votes on Thursday had taken photos of their marked ballots and shared them on Facebook.

“It is highly illegal to do so,” he said.

Government employees are able to vote before others because most of them will be on election duty on Nov. 16.