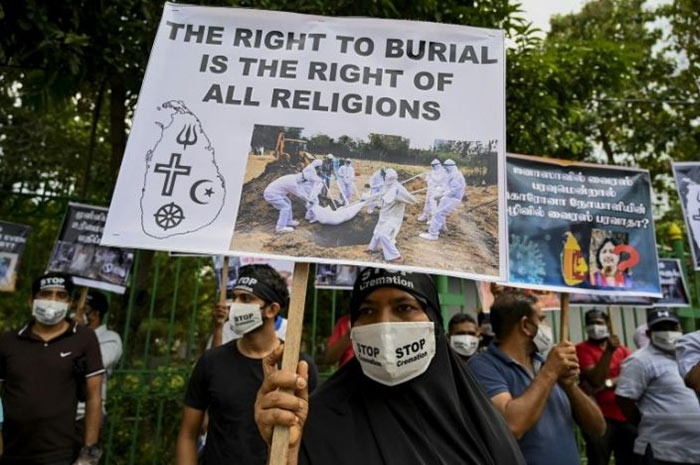 A plan by Sri Lanka to bury Muslim coronavirus victims on a remote islet was slammed on Wednesday by locals and the minority community.

Colombo banned burials of COVID-19 victims in April, despite expert assurances they would not spread the virus, implementing a policy of forced cremations.

Sri Lanka’s Muslims, who make up 10 percent of its 21 million people, challenged the policy, pointing out that cremations are forbidden under Islamic law.

And on Tuesday, officials proposed burying Muslim virus victims on the remote islet of Iranaitivu, 8.6 miles (13 kilometres) off the country’s northern coast.

That plan sparked protests from locals as well as from Muslim leaders. On Wednesday dozens of Tamil residents, led by Catholic priests, demonstrated in Kilinochchi, the nearest mainland district to Iranaitivu.

They held banners saying the one-square-kilometre (0.4-square-mile) island should not be used as a “graveyard” for the pandemic.

The main Muslim party, the Sri Lanka Muslim Congress (SLMC), said families “want to bury our people in our own burial grounds”.

“This proposal of a remote island is an insult, it is unacceptable,” SLMC leader Rauff Hakeem told AFP.

The islet burials policy has yet to be rolled out.

Ahead of Khan’s visit to Colombo, the 57-member Organisation of Islamic Cooperation in February criticised the cremations policy at the United Nations Human Rights Council in Geneva, citing similar religious concerns.

Sri Lanka’s majority Buddhists, strong backers of the current government, are typically cremated, as are Hindus.

In December, authorities ordered the cremation of at least 19 Muslim COVID-19 victims after their families refused to claim the bodies from a hospital morgue in protest against the policy.

By Wednesday, Sri Lanka had recorded more than 83,000 coronavirus infections, with 483 related deaths.