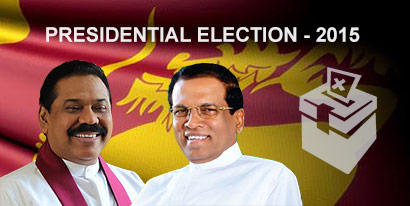 There are 19 candidates in the fray, including incumbent President Mahinda Rajapaksa from the UPFA and former SLFP General Secretary, former Health Minister Maithripala Sirisena from the New Democratic Front.

There are 12,314 polling stations in the 22 administrative districts. Ballot boxes were sent to respective polling stations from main counting centres countrywide yesterday under heavy security.

More than 70,000 policemen would be on duty for the Presidential Election, the Polls Chief said, adding that the army would be deployed if necessary and security had been tightened in several areas where violent incidents had been reported.

The counting of vote would commence at 6.00pm today and it is expected to release first postal voting result after 10pm.