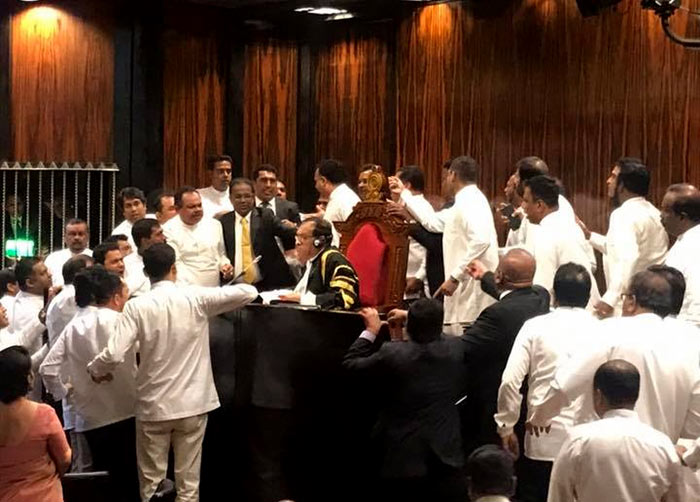 A tense situation broke out in Parliament this morning when Speaker of House Karu Jayasuriya called for a No-Confidence Motion pertaining to the statement made by Mahinda Rajapaksa.

The House convened at 10am with the Speaker claiming that a Prime Minister, Leader of the House or a Chief Government Whip will not be recognised in Parliament today, as the No-Confidence Motion against Mahinda Rajapaksa was passed in the Parliament yesterday.

The Speaker then called for Mahinda Rajapaksa to deliver his statement as a Member of Parliament.

In his statement Mahinda Rajapaksa explained the reasons behind President Maithripala Sirisena appointing him as the Prime Minister.

Parliamentarian Mahinda Rajapaksa in his speech also said that the prices of fuel will be reduced further tonight.

United National Party Parliamentarian Lakshman Kiriella then tabling a point of order called for a vote on Mahinda Rajapaksa’s statement, claiming the House has no faith in him.

He called for a vote to be called by name. When Speaker Karu Jayasuriya called for the opinion of the House on the matter a tense situation broke out.

United People’s Freedom Alliance MPs rounded up on Speaker Jayasuriya with United National Party MPs also taking the floor to prevent any untoward actions. A clash also broke out between the MPs during this time.

Several MPs including UPFA Parliamentarian Dilum Amunugama were injured during the tense situation in Parliament a while ago.

They had been taken to medical center in Parliament.

UPDATE: The Office of the Speaker has announced that the Parliament has been adjourned until the 21st of November.

3 Responses to Tense situation in Parliament