UNP demands ‘Give Government to Ranil’ 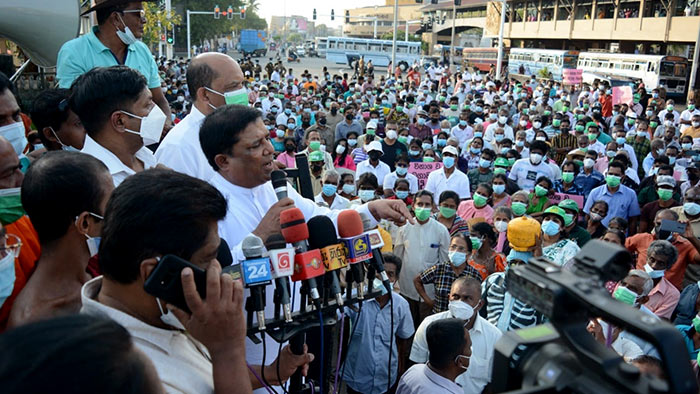 A massive protest organised by the UNP in collaboration with various trade unions and political parties was held opposite the Galle SLTB bus terminal last evening (25), condemning the rule of the Government as well as increase in prices of essential commodities.

The protest commenced around 3:00 p.m. A large number of UNP activists and the public from various parts of the Galle District took part in the protest.

The protesters were carrying banners bearing slogans such as ‘remove the salary anomalies of government servants’, ‘pay compensation to farmers who were impacted by the shortage of fertiliser’, ’educated youth have no jobs’, ‘we have no means for survival’ and ‘give the government to Ranil’ etc.

The protest had been organised by UNP Chairman Wajira Abeywardena on the instructions of UNP Leader, MP Ranil Wickremesinghe.

Abeywardena said, the protest was organised to bring to the attention of the government of the impact to the economy as well as the lives of ordinary people of this country, but not to harm or take revenge on others.

He said, the protest was intended to formulate a strong national policy framework, suitable for another 15 years which cannot be easily amended by anyone easily.

9 Responses to UNP demands ‘Give Government to Ranil’