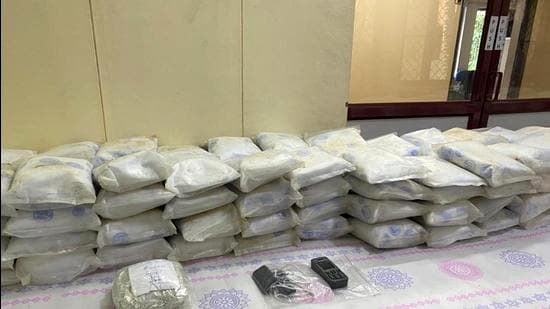 Officials said the Indian naval ship Suvarna intercepted the Lankan boat “DU Shashila” in the high seas of the Indian Ocean on suspicion of drug trafficking and brought the boat to Kochi’s Mattancherry Wharf for an extensive search by the NCB.

The preliminary search did not yield anything. But a thorough hunt for the narcotics led investigators to the 340 packets of heroin concealed in ice in the boat’s cargo hold. A senior NCB official said each packet was stamped with a crown symbol with the words “KING 2021”, a practice followed by drug trafficking syndicates to brand their merchandise.

According to the NCB, the consignment has a street value of INR 3,400 million in India, and INR 17,500 million in the international market.

“This is a major catch not only in terms of the quantity and cost but also from the perspective of disruption of the illegal narcotics smuggling routes, which emanate from the Makran coast and flow towards the Indian, Maldivian and Sri Lankan destinations,” an Indian defence ministry statement said.

This is the second major drug haul by the NCB off the Kerala coast in three weeks.

On 30 March, the NCB announced the seizure of 300 kg heroin from a Sri Lankan fishing vessel that had been intercepted by the Indian coast guard off the coast of Kerala’s Vizhinjam, nearly 200 km from Kochi. The Indian federal drug enforcement agency also seized five AK-47 rifles and 1,000 rounds of 9mm ammunition from the vessel.

Investigations by the NCB in this case also indicated an Iranian link to the consignment. The heroin and arms consignment had been handed over to the crew of the Sri Lankan vessel in the high seas near Lakshadweep by an unidentified vessel that had come from Chabahar Port in Iran.

In January also, NCB officials linked a multinational crime syndicate that had been smuggling heroin from Pakistan and Iran to a seizure of 100 kg heroin from a Lankan vessel “Shenaya Duwa” intercepted in the high seas south of Tamil Nadu’s Thoothukudi on 25 November last year. Investigations into this haul had led to the arrest of two Sri Lankan nationals, believed to be kingpins of a drug syndicate, from Chennai. These two – MMM Nawas and Mohamed Afnas – controlled the pickup and delivery of narcotic drugs from Pakistani and Iranian vessels.

This international syndicate had its tentacles in Pakistan, Afghanistan, Iran, Sri Lanka, Maldives and Australia.

Monday’s seizure is in line with the NCB’s assessment that indicated syndicates were increasingly turning to the sea route for smuggling narcotics since the traditional route through India’s north-western borders was becoming tougher to breach.