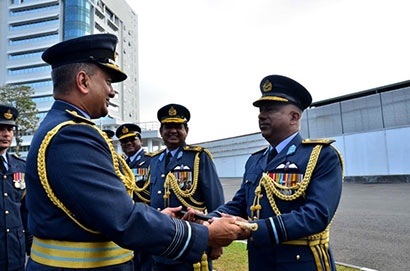 Air Marshal Harsha Abeywickrema, who retired from this role, handed over duties in a ceremony held yesterday (27) at the Air Force Headquarters. The new Commander was presented with the Commander’s official sword at the event.

Educated at S. Thomas’ College and Royal College Colombo, he joined the Sri Lanka Air Force as an Officer Cadet in the General Duties Pilot Branch. After successful completion of Flying Training he was commissioned as a Pilot Officer.

He has also served as Director Air Operations and the Chief of Staff prior to his appointment as Commander.