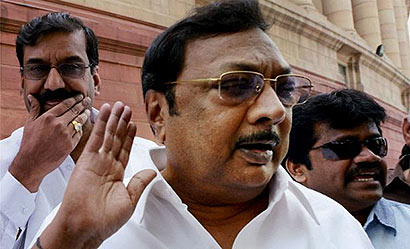 In further signs of fissures within the DMK, party chief M. Karunanidhi’s son M.K. Alagiri on Monday skipped the crucial Executive committee meet, which is likely to take key decisions in the wake of the party’s pullout from the ruling UPA at the Centre.

The Madurai strongman and former Union Minister’s action assumes significance in the wake of his submitting his resignation from the Union Ministry to Prime Minister Manmohan Singh last week separately, after Mr. Karunanidhi withdrew support to the UPA coalition.

Sibling rivalry is not new in the DMK with Mr. Alagiri and his brother Stalin vying for recognition as Mr. Karunanidhi’s “political heir apparent.”

Recently, the DMK chief had indicated that Mr. Stalin would be his successor, drawing flak from Mr. Alagiri who said that the DMK is not a “mutt” where a senior pontiff can anoint his successor. (The Hindu)