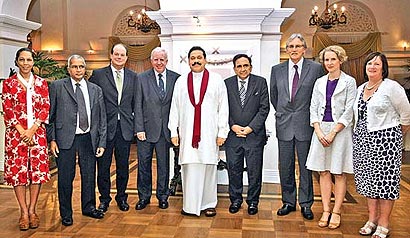 All parties in the United Kingdom stand by you and are ready to help Sri Lanka today. We are happy that terrorism has gone away from this island; that reconstruction, rejuvenation and reconciliation is the order of the day, said Paul Murphy MP (Labour), leader of the visiting Parliamentary delegation from the Commonwealth Parliamentary Association (CPA) UK, when they met President Mahinda Rajapaksa at Temple Trees last evening (18).

Recalling his earlier visit to Sri Lanka, when he went to Kilinochchi then under LTTE control, Murphy said the situation here was similar to that in the UK which had won the war in Northern Ireland and had to win the peace.

In a discussion that lasted more than 45 minutes, the delegation covered a wide range of issues, which were discussed with great candour and cordiality.

President Rajapaksa explained to the delegation that what the people of the North of Sri Lanka wanted most today were the essentials of water, electricity, schools, health services and education. There was a yearning for development among the Tamil people, asserting that there could be no development without peace and vice versa.

Speaking on the efforts at reconciliation, he told the delegates of the work being done by the Lessons Learnt and Reconciliation Commission, and regretted that organizations such as Amnesty International, Human Rights Watch and the International Crisis Group that had been invited to give evidence before it had refused to do so.

The Commission was open to all including the United Nations, he said, emphasizing that reconciliation in Sri Lanka needed a home grown solution, and not one that is transported from elsewhere, even from Northern Ireland. It must be based on our own experience, while we are ready to learn from the experience of others, he said.

Responding to questions about a political solution to the ethnic issue, President Rajapaksa said he looked forward to a dialogue with all Tamil political parties. Some had already responded positively. There are more parties than one representing Tamils and we look forward to consensus among all, especially on aspects of development, he said.

On the question of the provincial administration in the North, the CPA-UK delegates were told that the first priority will be Local Government Elections, after which there would be elections to the Northern Provincial Council, similar to the political progress that had taken place in the East, after the defeat of terrorism.

Asked by Hon, (Mrs.) Helen Grant (Conservative) and the Hon. (Ms.) Fiona Donnor (Labour) about the situation of children who had suffered injury due to landmines and the rehabilitation of child soldiers and other child victims of terrorism, Minister Basil Rajapaksa explained that the Jaipur Foot Organization of India was doing considerable work in assisting those who has lost their legs due to landmines. With regard to child soldiers it was explained that all of them had been released to their parents. Most were attending schools, even in Colombo.

Youth whose university education had been interrupted due carrying arms for the LTTE, had been given special opportunities to continue their higher education. The rehabilitation work for children and youth was receiving assistance from UNICEF, IOM and the US Government, he said.

President Rajapaksa explained that Sri Lanka had clearly made the fastest progress in the rehabilitation of child soldiers and youth, who had been made the victims of armed conflict.

Responding to a question by Lord Sheik (Conservative) about the progress of moves for devolution of power, President Rajapaksa said that whatever solution arrived at must be one that is acceptable to the people. He was emphatic is stating that what the LTTE wanted could not be given. But any reasonable aspects of devolution, for which all parties have consensual agreement, can be granted by Parliament, he said. The President said he will encourage all parties to come to a settlement, and that Parliament must finally decide, as there was the need for a two-third majority for any Constitutional change.

President Rajapaksa also assured that there were no obstacles to Tamil expatriates abroad coming to Sri Lanka and also investing here. In fact that was being encouraged. However, he said that was a section of the expatriates, or the Diaspora, who would not change their attitudes, and were continuing even now raise funds for pro-LTTE activities. The countries in which they had obtained refugee and other status must look into this aspect, he said.

He added that it was high time such Tamil expatriates changed their view of the situation in Sri Lanka, come back and work with the Tamil people, invest in the country and make a genuine difference to the live of the Tamil people.

Responding to a question on the readiness of the Government to work with NGOs, INGOs and such organizations, President Rajapaksa said There are NGOs and NGO. Sri Lanka had the example of NGOs that had obtained large sums of money from abroad, from people and governments abroad, during the Tsunami, but had done no relief work here. We have to be wary of such organizations, however, we are ready to work and in fact work with a large number genuine NGO? he said. The CPA – UK delegates were told that some NGOs had their own political agenda which were not in the wider interests of the country.