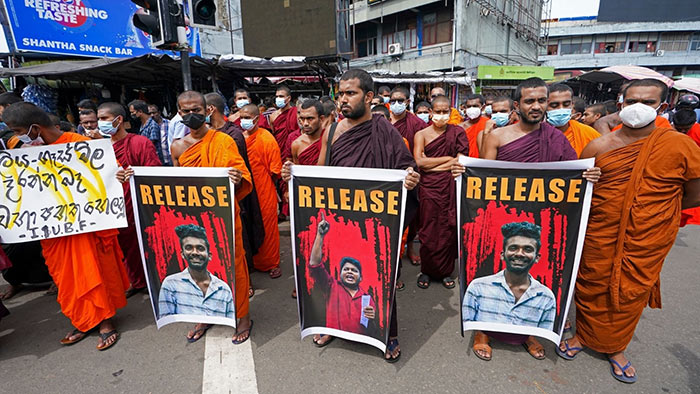 University Buddhist monks take part in a demonstration against the government demanding the release of their students’ leaders, amidst economic crisis in Colombo, Sri Lanka on September 8, 2022. (Photo by AFP via Getty Images)

Sri Lanka added 37 new senior posts to its government on Thursday, sparking a social media backlash over “useless” public spending in the middle of its worst economic crisis on record.

The country of 22 million has suffered months of rampant inflation, severe shortages of essential goods and widespread protests, pushing it to default on its foreign debt in April.

The 37 new state ministers will not accept their modest salaries, but they are entitled to three cars each with fuel, state housing, bodyguards, salaries for personal staff and free stamps, the government said.

On social media, some Sri Lankans vented frustration over the use of public funds.

Mirhani Rahees added on the platform: “Spending on these useless state ministers… we have to tighten our belts. There goes my tax money in flames.”

Another user, Krishna Perera, accused the government of having “no commitment to human rights, economic reform, or accountability”.

The new members all come from the coalition of former president Gotabaya Rajapaksa, who fled Sri Lanka in July after protesters overran his official residence, but he returned to the country last week.

Among the new ministers is Rajapaksa’s nephew, Sashindra, who takes the irrigation portfolio.

The 37 new posts are in addition to the 20-member cabinet of President Ranil Wickremesinghe, who took over in late July following Rajapaksa’s exit.

Wickremesinghe, a six-time prime minister, has only one seat in the 225-member parliament and depends on Rajapaksa’s Sri Lanka Podujana Peramuna (SLPP) party, the largest bloc.

Officials close to Wickremesinghe said his attempts to form a broad unity government were yet to materialise as the main opposition Samagi Jana Balawegaya (SJB) had refused to join.

Sri Lanka is in talks with the International Monetary Fund to finalise a $2.9-billion bailout that requires Colombo to raise taxes and privatise loss-making state enterprises — both politically unpopular moves.

In a new report released Tuesday, the UN Human Rights Council urged Wickremesinghe to prosecute those responsible for economic crimes that bankrupted the country.

The report said a culture of impunity for war-time atrocities during the decades-long civil war that ended in 2009 had led to the economic crisis which has undermined the rights of all communities.