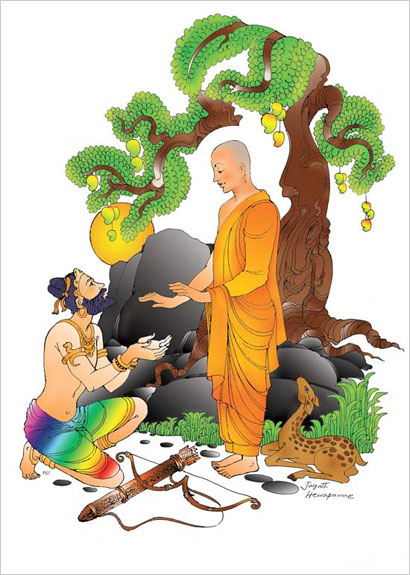 It is an undisputed fact that the arrival of Arahat Mahinda to Sri Lanka 236 years after the Parinirvana of the Buddha and his meeting with King Devanampiyatissa at the mango grove of Ambastale in Mihintale, is among the momentous events in the history of Sri Lanka. This year, we commemorate this great event as the 2320th Poson Festival. The arrival of Arahat Mahinda to Sri Lanka endowed us with a great teaching of wisdom and non-violence, President Mahinda Rajapaksa said in a message to mark Poson.

The message: “The teachings of the Buddha preached by the Arahat Mahinda helped us to enrich our lives as a righteous society in a nation that has its foundations on the observance of the Pancha Seela or the Five Noble Precepts.

“This righteous path of the Dhamma brought a valued example to governance, too. This system of governance, free of fourfold evil, raised us to a special position among all nations on economic, social and cultural aspects of social organisation. It is our responsibility today to ensure the continuance of the path of the Dhamma that brought such honour and dignity to our society. “We have initiated and carried out many things to build a righteous society in which all could live in the satisfaction of unity and peace. It is my strong belief that a country and nation will be strengthened and protected by a society enriched by righteousness.

“It is the duty of all Buddhists to follow the teachings brought to us by Arahat Mahinda and pay due homage to these teachings through a life imbued with principle, courage and wisdom. “May all who commemorate the arrival of Arahat Mahinda on this Poson Day receive the Blessings of the Noble Triple Gem|.”

The task ahead of us is to adjust our lives on lines of Buddhist values, Prime Minister D M Jayaratne said in a message to mark Poson.

The message: “It is with great devotion I am sending my best wishes to all citizens of Sri Lanka and Buddhists world over on Poson full moon Poya Day which marks two noble events, the arrival of Mihindu Maha Rahathan to Sri Lanka and the establishment of Buddhism in Sri Lanka.

“We cannot deny the fact that it was the arrival of Arahat Mahinda (Mahindagamanaya) to Sri Lanka that took place on a similar day 2,300 years ago was the sole factor that paved the way for religious, cultural and social revival in Sri Lanka.

“It has to be kept in mind that in the aftermath of Mahindagamanaya, it is the Ven Maha Sangha, noble guardians of the Buddha Sasana and Buddhism, who are bestowed with the meritorious task of raising, the rulers and the ruled, and the country to the highest social standard.

“Though dwelling on the painful past will bring sorrow, during the era when terrorism perpetrated by the LTTE deprived the opportunity for devotees to engage in religious observances at sacred places like Ambasthalaya, Anuradhapura, Polonnaruwa , Jaffna and religious places in many other places of the country. “The bomb attacks aimed at Dalada Maligawa and the assassination of bhikkhus at Jaya Sri Maha Bodhi are capable of bringing tears to eyes. That dark horrendous era is no more. President Mahinda Rajapaksa, the leader dedicated himself to the course of Buddha Sasana, managed to eradicate the ruthless terrorism. “The task ahead of us is to adjust our lives on lines of Buddhist values. The 2600th Sambuddhathwa Jayanthi is the opportune time for this task and we could practice such good qualities through respect to each other and tolerance as Buddhists.

“Let us make earnest efforts to follow the footsteps of Arahath Mahinda and the teachings of the Buddha.”