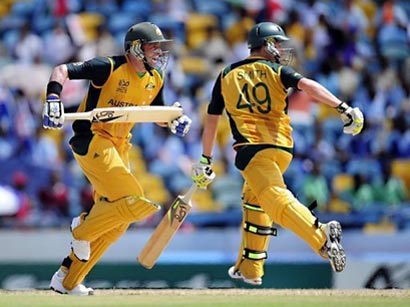 BRIDGETOWN, Barbados (AP)—Cameron White smashed an unbeaten 85 off 49 balls before Australia’s bowlers destroyed Sri Lanka’s batting line-up to set up an 81-run victory in a Super Eights match at the World Twenty20 at Kensington Oval on Sunday.

White orchestrated Australia’s recovery from a perilous 67-5 to a challenging 168-5 off 20 overs.

The right-hander lashed six fours and six sixes and shared a brilliant partnership of 101 off nine overs with Michael Hussey.

Left-hander Hussey compiled an unbeaten 39 off 26 balls with four fours and a six.

Suraj Randiv claimed 3-20 with his off-spin while medium-pacer Angelo Mathews picked up 2-24.

The victory was Australia’s second in a row in the Super Eight stage and all but sealed it a spot in the semi-finals.

Shane Watson dragged on from Mathews, who also claimed Brad Haddin to a catch at long-off.

Randiv had the dangerous David Warner caught at slip and David Hussey caught behind with successive deliveries.

Randiv could also have removed White for 24 but Ajantha Mendis dropped a chance at short fine leg.

It proved a costly miss as White helped Australia amass 90 runs off its final seven overs.

Sri Lanka’s innings unravelled swiftly once Nannes claimed the wicket of the tournament’s leading run-scorer Mahela Jayawardene in the third over.

Jayawardene, after scores of 81, 100 and 98 not out in previous innings, miscued a pull to fine leg.

The short ball also accounted for captain Kumar Sangakkara, who top-edged a pull to the wicket-keeper off Shaun Tait.

Nannes then trapped Jayasuriya plumb in front playing across the line.

Tillakaratne Dilshan top-scored with 20 off 12 balls but his resistance was brief.