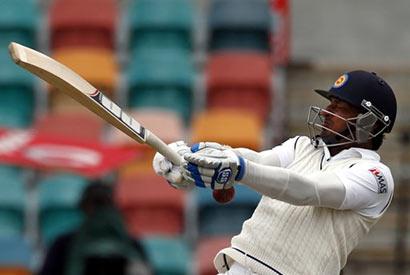 MELBOURNE (Reuters) – Australia’s pace attack scythed through Sri Lanka’s top order to leave the hosts reeling at 79-3, but master batsman Kumar Sangakkara celebrated his 10,000th test run shortly before lunch on the opening day of the second test in Melbourne on Wednesday.

Sangakkara became the 11th batsman to reach the milestone and did it in style by punching a glorious cover drive for four off the bowling of seamer Mitchell Johnson in the last over before the break at the Melbourne Cricket Ground.

The 35-year-old former captain drew a standing ovation and shook hands with the Australian team as he strode off unbeaten on 43 in glorious sunshine in front of a bumper Boxing Day test crowd.

Sangakkara and Thilan Samaraweera (10 not out) were left to rescue the Sri Lankan innings after a top-order collapse that had three wickets fall in a little over an hour’s play.

Sri Lanka won the toss and elected to bat first but the decision appeared a folly as debutant Jackson Bird, Johnson and Peter Siddle captured a wicket each.

After accepting his baggy green cap from former captain Bill Lawry, the 26-year-old Bird opened the bowling with Johnson and celebrated his first test wicket in just his second over, having opener Dimuth Karunaratne caught behind for five.

Rookie left-hander Karunaratne pushed at a ball moving away and feathered the edge to wicketkeeper Matthew Wade for his first catch on his 25th birthday.

Mercurial left-armer Johnson struck only three overs later, bowling Tillakaratne Dilshan for 11, the feisty opener throwing away his wicket with a horrible slog attempt that served only to nick the ball onto the stumps.

Mahela Jayawardene joined Sangakkara in the middle with the score 19-2, but the partnership lasted only 18 runs before Peter Siddle removed the Sri Lanka captain for three with his third delivery after the drinks break.

The fiery Siddle coaxed Jayawardene forward with a ball that moved away and he feathered a catch to Wade to end a scratchy 26-ball innings that continues his struggles with the bat. The 35-year-old has failed to pass 19 runs in his last five innings.

Sangakkara stood firm, however, and launched an exhilarating counter-attack to give Sri Lanka hope of rebuilding their innings.

Australia captain Michael Clarke was cleared to play after sustaining a hamstring injury in the hosts’ first test victory in Hobart.

Sri Lanka seamer Nuwan Kulasekara was ruled out with injury and replaced by Dhammika Prasad.