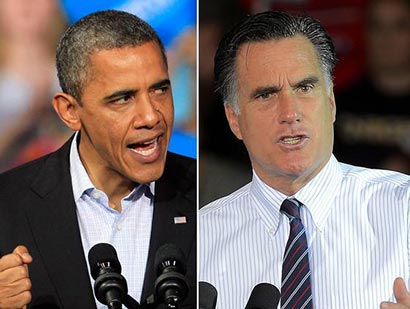 President Barack Obama handily defeated Gov. Mitt Romney and won himself a second term Tuesday after a bitter and historically expensive race that was primarily fought in just a handful of battleground states. Networks project that Obama beat Romney after nabbing the crucial state of Ohio.

The Romney campaign’s last-ditch attempt to put blue-leaning Midwestern swing states in play failed as Obama’s Midwestern firewall sent the president back to the White House for four more years. Obama picked up the swing states of New Hampshire, Michigan, New Mexico, Iowa, Wisconsin, Pennsylvania, Minnesota, and Ohio. Florida and Virginia are still too close to call, but even if he won them, they would not give Romney enough Electoral College votes to put him over the top. The popular vote will most likely be much narrower than the president’s Electoral College victory.

The Romney campaign cast the election as a referendum on Obama’s economic policies, frequently comparing him to former President Jimmy Carter and asking voters the Reagan-esque question of whether they are better off than they were four years ago. But the Obama campaign pushed back on the referendum framing, blanketing key states such as Ohio early on with ads painting him as a multimillionaire more concerned with profits than people. The Obama campaign also aggressively attacked Romney on reproductive rights issues, tying Romney to a handful of Republican candidates who made controversial comments about rape and abortion.

These ads were one reason Romney faced a steep likeability problem for most of the race, until his expert performance at the first presidential debate in Denver in October. After that debate, and a near universal panning of Obama’s performance, Romney caught up with Obama in national polls, and almost closed his favoribility gap with the president. In polls, voters consistently gave him an edge over Obama on who would handle the economy better and create more jobs, even as they rated Obama higher on caring about the middle class.

But the president’s Midwestern firewall–and the campaign’s impressive grassroots operation–carried him through. Ohio tends to vote a bit more Republican than the nation as a whole, but Obama was able to stave off that trend and hold an edge there over Romney, perhaps due to the president’s support of the auto bailout three years ago. Romney and his running mate Paul Ryan all but moved to Ohio in the last weeks of the campaign, trying and ultimately failing to erase Obama’s lead there.

A shrinking electoral battleground this year meant that only 14 states were really seen as in play, and both candidates spent most of their time and money in those states. Though national polls showed the two candidates in a dead heat, Obama consistently held a lead in the states that mattered. That, and his campaign’s much-touted get out the vote efforts and overall ground game, may be what pushed Obama over the finish line.

Now, Obama heads back to office facing what will most likely be bitterly partisan negotiations over whether the Bush tax cuts should expire. The House will still be majority Republican, with Democrats maintaining their majority in the Senate.

The loss may provoke some soul searching in the Republican Party. This election was seen as a prime opportunity to unseat Obama, as polls showed Americans were unhappy with a sluggish economy, sky-high unemployment, and a health care reform bill that remained widely unpopular. Romney took hardline positions on immigration, federal spending, and taxes during the long Republican primary when he faced multiple challenges from the right. He later shifted to the center in tone on many of those issues, but it’s possible the primary painted him into a too-conservative corner to appeal to moderates during the general election. The candidate also at times seemed unable to effectively counter Democratic attacks on his business experience and personal wealth.