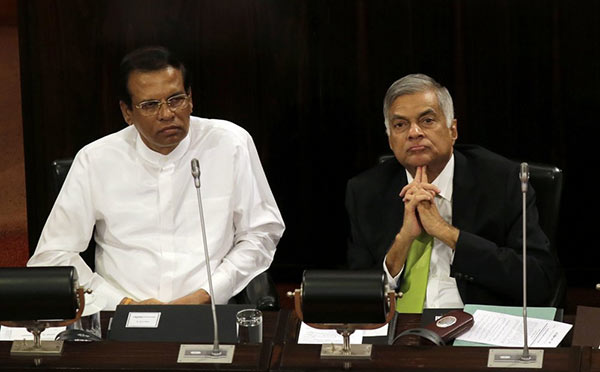 A bill to abolish the death penalty has been submitted to Sri Lanka’s Parliament, while the president has sanctioned the hanging of four drug convicts.

The bill seems to be a move by Prime Minister Ranil Wickremesinghe to stop the planned executions, which are now stayed by the courts.

He and President Maithripala Sirisena formed a unity government in 2015 but have fallen out and become rival power centers within the government.

Lawmaker Bandula Lal Bandarigoda said Friday the bill seeks to abolish the death sentence in the future and commute the sentences of those who are already on death row to life imprisonment. The bill submitted on Thursday will be taken for a vote in 14 days if no one challenges it.

Speaking at a public event, Sirisena said those who oppose executions in reality oppose building a decent county. He said narcotics are the root cause of all other major crimes and he decided to execute prisoners for the betterment of future generations.

Sirisena announced in June that he has signed the death warrants of four prisoners convicted of drug offenses.

The European Union said Sirisena’s move contradicted the government’s commitment last year to the U.N. General Assembly to maintain its 43-year moratorium on death penalty. The EU said the planned executions will send the wrong signals to the international community and investors and it will monitor Sri Lanka’s commitments to international conventions. Sri Lanka has lucrative market access to the EU through a preferential trade scheme that hinges on those commitments.

After Sirisena’s announcement, Wickremesinghe said his party opposes executions because the Sri Lankan government under Sirisena has supported UN resolutions for a moratorium on death penalty in 2016 and 2018.

Sri Lanka has not hanged a prisoner since 1976 even though courts routinely pass death sentences. Prison officials hired two hangmen after Sirisena sanctioned the executions.

The Supreme Court has stayed the executions until Oct. 30 in response to a petition by a death row inmate.