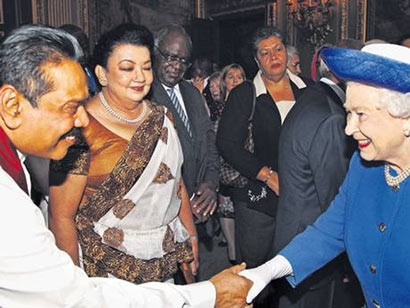 The Article was published on: “The Independent” Newspaper

Britain is selling millions of pounds worth of small arms and ammunition to Sri Lanka despite the country’s dire human rights record, The Independent can disclose today. Figures taken from the Government’s own database show how the authorities in Colombo have gone on a buying spree of British small arms and weaponry worth at least £3m.

Some of the items sold to Sri Lanka include pistols, rifles, assault rifles, body armour and combat shotguns – despite the Foreign Office still classifying the South Asian nation as a “country of concern” for rights abuses.

The sales indicate how far President Mahinda Rajapaksa’s government has been welcomed back into the international fold by Britain, despite the behaviour of his armed forces during the brutal last few months of the 2009 civil war.

The conflict was the culmination of a 30-year conflict with violent Tamil Tiger separatists and resulted in the deaths of between 60,000 and 100,000 people over a four-month period, most of whom were civilians.

Both sides were accused of human rights abuses and although the Sri Lankan government won a comprehensive victory against the Tigers, it has since resisted international calls for an independent investigation into well-documented allegations that Sri Lankan Army soldiers were involved in rape, torture, extra-judicial killings and the deliberate targeting of civilians.

The figures on Britain’s most recent arms sales come from the Government’s own Export Controls Organisation, which releases quarterly figures. They reveal that in the three months between July and September last year, the UK approved export licences worth £3.741m, of which just over £3m were military items.

More than £2m of the sales came under the “ML1” label – a category used by the Government to denote small arms and weapons. Export licences were granted on four separate occasions – once in July and three times in August. In total the Government approved the sale of 600 assault rifles, 650 rifles, 100 pistols and 50 combat shotguns. The sales also included £330,000-worth of ammunition and £655,000 in body armour.

It is not clear whether the sales are a one-off or represent a significant increase in British weaponry heading to Sri Lanka. From the beginning of 2008 to June 2012, the value of export licences to Sri Lanka amounted to just £12m.

Nonetheless there were no licence refusals in the third quarter of last year, despite concerns being raised about human rights in Sri Lanka. At the time, judges in the High Court were granting a slew of last-minute injunctions to stop the Government forcibly deporting failed Tamil asylum seekers due to clear evidence that some of them risked being tortured on their return.

Human Rights Watch, Freedom from Torture and Tamils Against Genocide have documented at least 40 cases where Tamils who were returned to Sri Lanka from European nations in the past two years have been tortured during interrogation by the Sri Lankan authorities.

His presence there sparked mass protests by British Tamils who were incensed that Mr Rajapaksa – whose brother Gotabhaya was in charge of the Sri Lankan army during the 2009 war – was being so publicly rehabilitated.

A spokesperson for UK Trade and Investment insisted that Britain has some of the most stringent export regulation in the world when it comes to arms.

But Kaye Stearman, from the Campaign Against Arms Trade, said: “Given Sri Lanka’s shameful military record and its continuing abuse of human rights, it seems extraordinary that the Government has approved these export licences for small arms and ammunition. In 2011-12, not a single licence application for these items was refused, even though the Foreign Office lists Sri Lanka as a ‘country of concern’ for its human rights record.”

Suren Surend-iran, from the Global Tamil Forum, a group based outside Sri Lanka that lobbies for Tamil independence, added: “The Coalition has a lot to answer [for], when especially the recent Foreign Affairs Select Committee report highlights the appalling status of the human rights situation in Sri Lanka.”

The final destination of the small arms is not known – but a footnote in the Government’s data suggests some of it may have been intended for “maritime anti-piracy” measures. Sri Lanka is fast turning itself into an anti-piracy hub, centred around the south-western port of Galle where many ex-navy and army servicemen who fought against the Tamil Tigers are making themselves available for security details on international shipping routes heading towards the pirate-infested waters off the Horn of Africa.

Anti-piracy measures could also include the Sri Lankan Navy, which has a controversial track record especially when it comes to firing on Indian fishermen from the southern state of Tamil Nadu. Over the past few decades hundreds of Indian Tamil fishermen have been shot and killed by Sri Lankans after they have inadvertently or deliberately strayed into their waters.

Earlier this month, 12 Indian fishermen claimed they were thrashed with sticks by Sri Lankan Navy personnel while fishing near Katchatheevu, an islet ceded by India to its neighbour. The Sri Lankan High Commission did not respond to calls to comment on the sales.

Ms Stearman said researchers have increasingly seen anti-piracy measures being used by the Government to justify arms sales but that the final destination for such weapons is often ambiguous. “Since the licence end-user is not listed, and the notes are often worded ambiguously, we don’t know which weapons are intended for this use,” she said.

“Given that Sri Lanka is now establishing itself as an anti-piracy centre, with operations staffed by ex-military personnel, there must be questions about who the weapons go to, how they are used, and where they end up. This is an area where greater transparency is badly needed.”

The Article was published on: “The Independent” Newspaper