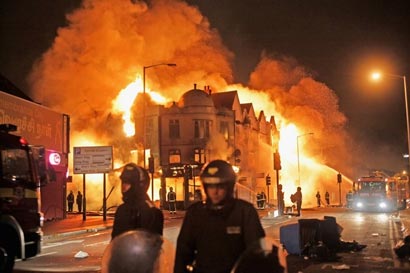 London (CNN) — Tensions between police and marauding gangs continued into Tuesday in areas of Great Britain, after violence initially sparked by the shooting death of a 29-year-old man in London spread to other parts of the nation.

The number of people arrested in London since the violence began has risen to 334, police said Tuesday. Dozens of police officers have been injured, police said.

British Prime Minister David Cameron cut short his vacation in Italy and is scheduled to hold an emergency meeting Tuesday to discuss the unrest. Home Secretary Theresa May also canceled her summer holiday to return to London.

In Ealing, West London, a bus was vandalized and set on fire, while the driver was still on board. He escaped without injury.

There was evidence of vandalism in central London, with visible damage to a number of shops.

Sony Corp. said its only warehouse London caught fire between late Monday and early Tuesday, with significant product damage but no casualties.

The company is working to determine the cause of the fire, but the warehouse is located in north London’s Enfield neighborhood, which has seen scattered protests.

The rioting has forced the postponement of at least one sporting event as West Ham United called off Tuesday night’s match with Aldershot Town.

“Whilst neither the club or police anticipate any issues around the game itself, the club has to comply with the police request,” a statement on the football club’s website said.

The developments come as reports of violence and vandalism flowed in from other parts of the country.

In Leeds, about 170 miles north of London, police reported no rioting early Tuesday, but said there were “pockets of isolated disorder.” A car was set on fire and a man was taken to hospital with serious injuries after an alleged shooting.

In Bristol, in southwest England, police said several shops and vehicles were damaged Monday night and “a number of main roads have been closed to allow officers to take control of what is currently a volatile situation.”

“Officers are urging people to avoid the city centre at this time. People already in the city centre should leave the area and go home,” Bristol police said in a statement early Tuesday.

Street disturbances also appeared to have spread to Birmingham, about 120 miles north of London, where police said “several premises” in the city center had been attacked “with some shop windows smashed and property stolen in various locations.”

A police statement issued early Tuesday said about 100 people had been arrested in Birmingham and added there were no reports of “major injuries to member of the public or police officers as a result of the disorder.”

Disturbances also were reported in the Liverpool area, about 180 miles northwest of London, with police there saying officers had responded to “reports of vehicles on fire and criminal damage” in south Liverpool.

A representative of London Mayor Boris Johnson said Monday evening that the mayor was cutting short his family holiday in North America to return to London.

“People have lost their homes, businesses and livelihoods through mindless violence,” he said.

Police said the rioting and looting in other parts of the capital were “copycat” events conducted by opportunists and criminals.

“This is not about the black community and the police, it’s about young people and the police,” said Shaun Bailey, a youth worker, in a statement circulated by the mayor’s office. “And let’s not beat around the bush and pretend this is some type of social justice protest — it’s sheer criminality.”

The violence started in Tottenham — the ethnically diverse, working-class suburb north of London’s center whose residents are predominantly Afro-Caribbean — after the shooting death Thursday of Mark Duggan, a black man, as he was seated inside a cab.

Duggan, a father of four, was killed. Shooting deaths are rare in England.

The commission divulged neither who shot Duggan nor why police had stopped the cab, with the incident still under investigation.

Some reports suggested that Duggan was held down by police and shot in the head, but the IPCC has denied this.

“Speculation that Mark Duggan was ‘assassinated’ in an execution style involving a number of shots to the head are categorically untrue,” the IPCC said in a statement.

The IPCC said evidence from Thursday’s shooting scene, including a non-police firearm, was to undergo forensic testing.

The man’s family and friends, who blamed police for the death, gathered Saturday night outside the Tottenham police station to protest.

Tottenham was the site of riots before. In 1985 Floyd Jarrett, who was of Afro-Caribbean origin, was stopped by police near the Broadwater Farm estate in Tottenham on suspicion of driving with a forged tax disc, a document all British vehicles must carry.

A few hours later, officers raided the nearby home of his mother, who collapsed and died during the raid. Rioting erupted shortly afterwards. Like the current violence, a protest outside Tottenham Police Station sparked the 1985 conflict.

4 Responses to Britain tense as gangs roam, violence flares in London, other cities