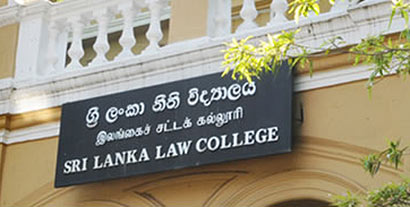 The growing controversy surrounding the Law College Entrance exam results is a serious issue that cannot be thrown under the carpet any longer. It revolves around the selection of 78 Muslim students, 3 of whom have topped the batch, 6 of whom are Muslim students within the first 10, and 28 of whom are within the first 50. At no time previously have Muslims secured more than 15 seats out of a total annual intake of about 300 students approximately. That the results were more than a coincidence sparked the attention of Bandula Chandrasekera, President of the National Intellectual Council who alleged that something was not quite right in the exam results. When Bandula Chandrasekera brought the accusation to the public attention followed by Press Conferences and public demonstrations by unsuccessful students and media scrutiny mostly in the Sinhala language newspapers, it began to dawn on the public that there was more to it than meets the eye.

It was more than simple cheating to get ahead of the rest of the pack which is not uncommon in public examinations in Sri Lanka. However what unsettled the public was the charge that a particular ethno – religious group was going all out hook or by crook to become a dominant presence in the political, economic and legal landscape in the country – something that have rung alarm bells in Western nations including Australia where citizens are now opposing immigration and the threats to their nation from a population surge of a particular group of ethnic religious immigrants.

The absence of a public outcry by those who have been elected to Parliament to give voice to the fears and anxieties of the people has compounded the problem. In this context the silence of the Bar Association of Sri Lanka is equally baffling.

The Bar Association of Sri Lanka which speaks for lawyers and future lawyers should have come forward to immediately call for answers from the authorities and demand an independent inquiry. If the President of the Bar Association takes no short cuts but flies off to file a case against the Parliamentary Select Committee why is he silent about the present controversy surrounding the law entrance results? Why are there no lawyers breaking coconuts over the injustice which is being brought to the public domain by aggrieved students and an organization calling itself the Bodu Bala Senawa. If not for them the entire nation would not have known that there is something untoward happening in an institution preparing students to join the legal profession in a few years time. All the controversy could have been avoided if  the  relevant authorities had immediately launched an unbiased investigation

Their silence alongside that of the Bar Association of Sri Lanka is deafening. Leaving a handful of aggrieved students and members of the Young Lawyers Association to address the issue certainly prompts us to question what is this justice that the legal fraternity is highlighting to the outside world? Close to 8000 aspiring lawyers sit for the Law College entrance exam which is conducted in all 3 languages of which 80% sit for the Sinhala paper, 15% in the English medium while 5% sit for the Tamil (majority of whom are Muslims). Only 300 students are lucky to be selected.

The recent exam for admissions to the 2013 batch saw 309 had passed of which 155 were Sinhalese (6295 sat for the Sinhala paper), 55 were Tamil and 78 were Muslim (total 705 Tamil medium students sat the exam) while of the 309 English medium students who sat only 21 had passed.

The annual pass rate of Muslims in the past were never more than 15 and when 78 Muslims had passed, with the top 3 being Muslim, six out of the first 10 slots,  and 28 Muslims securing the first 50 slots – it raises anyone’s eyebrows! Juxtaposed with the rise in the Muslim quota was the coincidence of the Justice Minister a Muslim being appointed in 2011 to this high office, and a member of a radical Muslim political party to boot.  The original question paper is set in English and thereafter translated into Sinhala and Tamil. Those that translate to Tamil are mostly Muslim.

Mr. Bandula Chandrasekera’s  interpretation for the good showing by the Muslim candidates was put down to leaking the paper to Muslim students by Muslim translators preparing the question paper in Tamil from the original version. Mr. Chandrasekera does not stop there. He goes on to accuse the Minister of Justice for giving preferential treatment to Muslims in admissions to the Law College, appointment of judges and judicial staff. The overall accusation is that the Minister of Justice is attempting to  Islamise the Sri Lanka’s Judicial sector. This is a serious charge that should not be taken lightly. Off course Mr Hakeem denies all accusations. We may recall former Ports Minister the late Mr. Ashroff made the Ports a Muslim only zone and he too denied accusations brought against him.

An investigation is certainly called for on account of a mock exam paper similar to that of the Law entrance exam paper being distributed prior to the exam in Wellawatte. Moreso, the Education Ministry has been in the limelight for several cases related to leakage of papers!

Now these are certainly no mild accusations. On the one hand it involves the future of students aspiring to become members of the legal profession and as one of the 3 pillars of democracy the entire country should be aware of what is going on.

There are several issues that emerge from this but given that the primary issue is the exam results the onus is on the authorities concerned to immediately conduct an investigation forthwith and clear the air.

With the judiciary taking precedence in Sri Lanka’s affairs causing international rebukes globally the question of justice comes to the focus. Justice as we want to believe should not be selective and the immediate question that needs to be highlighted is where are all the doyens of justice and why are they all silent about the accusations of malpractice in the law college entrance results?

Head of the Bar Association of Sri Lanka

We continue to highlight the discrepancies in the conduct of the Bar Association of Sri Lanka because it is led by a politician. This obviously leads any to wonder at his loyalty ratio – is it to client or citizen? It is nothing new that some politicians who are elected to Parliament with the backing  of the Sinhala Buddhist vote soon forget their gratitude and become prey to ethnic and religious minorities who have the money and influence to help them indulge in their fantasies  and it is then thet latter’s interests that become top of any lists even those of national concern. We do not wish to speculate on whether this is the reason for the silence of the Head of the entity that is tasked to speak on behalf of the legal profession of Sri Lanka?

Isn’t the silence of this Association tantamount to a gross violation of the very virtues they are attempting to uphold and project to the world? Are these cries about “injustice” now been relayed across the world only meant for  cosmetic and decorative purposes or does the legal profession seriously want to ensure that those who are admitted to  study law at the Law College gain admission without bias?

The next issue is the fact of dealing with a new wave of extremism that is engulfing the nation. It has become common practice for minorities to engage in multiple forms of encroachment (land, property, religious rights, freedoms etc) and use the tag of “national reconciliation” to forward their ethnic-based agendas to secure a strong expansionist base on account of their ethnic links overseas and when irregularities committed are brought forward the reaction has been to cry ethnic discrimination and promote the theory that the accusations are leading towards ethnic division and disunity in order to evade answering the accusations made. It is time to call the bluff and say loudly that enough is enough.

What has made matters confusing is the inexplicable silence of the Council of Legal Education which has said it is not interfering with the results and this is the body that is vested with the responsibility of administration of the Sri Lanka Law College – the country’s only law college that produces lawyers in Sri Lanka. Six of the members of the Council of Legal Education are nominees of the Minister of Justice.

Then the Department of Examination which conducts the entrance exam is certainly not without controversy and of late a string of malpractices that has taken place gives further reasons why a thorough investigation should take place to quell all doubts. What is baffling is why does it have to take protests by aggrieved students and members of the Bodu Bala Sena to have to adopt vociferous means to demand an investigation when it would have been the most sensible and rational thing to do in this context?

And no sooner when the accusation of possible foul play was brought to the focus of the public it should have been the Bar Association of Sri Lanka who should have made that first appeal for an independent investigation – that is how proper justice works. It is sad to note the price and the dis-favour that the legal profession is earning today in the public eye due to the politicization of the Bar Association with an unapologetic politician with multiple loyalties and various conflicts of interest, as its head.

Did it really have to take a satyagraha to call for an investigation, when entities associated with the legal fraternity that claims to be far superior to all pillars of Governance in a democracy should have put allegations to rest by addressing the issue and calling for  an impartial investigation.

Did it have to go all the way to Sri Lanka’s parliament for members of parliament to realize that the issue could be blown out of proportion simply because those that should have attended to the matter chose to politicize the matter and remain silent ?

Let an investigation decide, if and where, foul play has taken place.