Central Bank explains inflation – Most food items down, everything else goes up 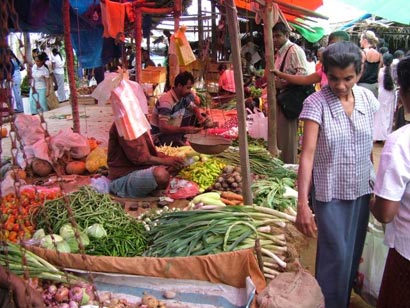 “The contribution to the monthly increase of 0.1 percent in the Index came from price increases in the non-food items, mainly due to the revision in the prices of fuel and gas during the month,” the Central Bank said. Year-on-year inflation reached 9.8 percent in April the highest in 27 months.

The Central Bank said: “Prices in the Food sub category, actually declined by 1.7 percent. Within this category, prices of almost all major food items such as rice, vegetables, green chilies, most varieties of fresh fish, big onions, red onions, eggs, coconut and coconut oil declined due to improvements in supply.

“Prices of chicken however moved up due to seasonal demand, while price increases were also registered for fruits and potatoes.

“Prices in the sub category of housing, water, electricity, gas and other fuels increased by 3.1 percent due to the upward revision in the prices of gas and kerosene oil while prices in the transport sub category increased by 2.8 percent mainly due to the price increases in petrol and diesel. Meanwhile, price increases were also registered in the sub categories of clothing and footwear (0.9 per cent); Furnishing, household equipment and routine household maintenance (2.0 per cent); recreation and culture (0.3 per cent); and miscellaneous goods and services (1.2 per cent),” the Central Bank said.

1 Response to Central Bank explains inflation – Most food items down, everything else goes up

Home » Central Bank explains inflation – Most food items down, everything else goes up