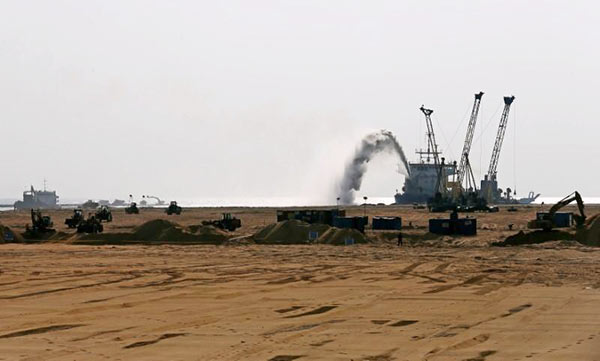 The $1.4 billion development of Port City, a project of China Communication Construction Company (CCCC) (601800.SS), the parent company of CHEC, began in late 2016 as part of Beijing’s ambitious plans to create a modern-day “Silk Road” across Asia.

“It will be part of the new financial city,” regional development minister Champika Ranawaka told reporters while accompanying Prime Minister Ranil Wickremesinghe on a inspection tour of the Port City development in Colombo.

“The investment will be $1 billion and we expect to sign the agreements this month in Beijing.”

reclaimed land from the sea in the commercial heart of Colombo, adjacent to the main port and the historic Galle Face Green park. The rest is expected to be reclaimed by June 2019.

For the overall project, Sri Lanka anticipates an eventual $13 billion of investment in housing, marinas, health facilities, schools and other developments over the next 30 years. The project is expected to create over 83,000 jobs.

CHEC Port City Colombo (Pvt) Ltd, the Sri Lanka company handling the project for CCCC, aims to deliver the first site for construction by the end of 2018.