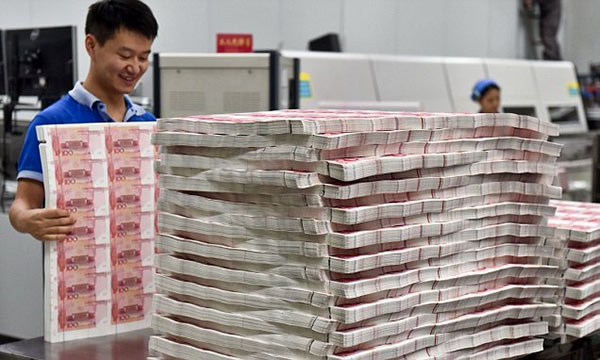 China is printing currencies for the governments of several countries, including Nepal, Sri Lanka, Bangladesh, Malaysia and Brazil, the Chinese media reported, quoting a top official of the state-owned banknote printer.

Liu Guisheng, Chairman of China Banknote Printing and Minting Corporation, wrote in an article in May in China Finance, a bi-monthly journal run by China’s central bank, that China obtained the first international commercial order for printing money from Nepal in 2015.

Since then the company had “seized the opportunities brought by the initiative” and “successfully won contracts for currency production projects in a number of countries” including Thailand, Bangladesh, Sri Lanka, Malaysia, Brazil and Poland, Liu wrote.

The ‘China Banknote Printing and Minting Corporation’ confirmed that money production plants across the country were running at near full capacity to meet an unusually high quota set by the government this year, Hong Kong-based South China Morning Post reported.

It said that most of the demand comes from participants in the ‘Belt and Road Initiative’ (BRI).

Chinese yuan bills only made “a small proportion of the orders” as most of the Chinese now got used to mobile or digital payments, it added.

Chinese yuan bills only made “a small proportion of the orders” as most of the Chinese now got used to mobile or digital payments, it added.

The BRI focuses on improving connectivity and cooperation among Asian countries, Africa, China and Europe. China says over 60 countries have signed up for BRI investments. The BRI includes the China-Pakistan Economic Corridor (CPEC), a project over which India has protested as it traverses through Pakistan-occupied Kashmir (PoK).

The ‘China Banknote Printing and Minting Corporation’, headquartered in Beijing, describes itself as the world’s largest money printer by scale. With more than 18,000 employees, it runs more than 10 strictly guarded facilities for the production of paper notes and coins, the paper said.

The nation’s largest currency paper mill in Baoding, Hebei province, sprang in to action with the sudden arrival of “big orders”, according to an employee working in the 604 Factory, a subsidiary of the corporation.

“Our machines have been running at full steam for months,” the paper quoted an employee working at the facility as saying.