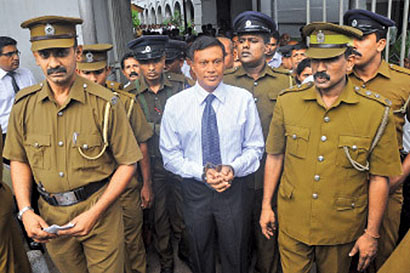 In reply to a query by the magistrate regarding holding in custody of the suspect on a Detention Order under the Prevention of Terrorism Act (PTA), the CID said the Attorney General’s advice is to be sought in this regard and the court will be informed.

The CID submitted that they had gone to search Vas Gunawardana’s residence in Nedimala and the suspect’s wife had been rude to them.

Investigations had been conducted under the Criminal Procedure Code within the legal frame work. Attorneys at Law Anura Seneviratne appearing along with Ajith Pathirana submitted that the suspect’s arrest was illegal. The suspect is held on a Detention Order under the PTA .

The suspect walked into the police station unaccompanied as he is innocent, counsel submitted. He should be tried under the normal law and not under the PTA. Apart from that the suspect’s son Ravindu Gunawardana could be produced as the CID says he is wanted for further investigations. The next date of the non summary inquiry was postponed for July 19.