Dayasiri bit my shoulder – Harin I didn’t bite anyone – Dayasiri 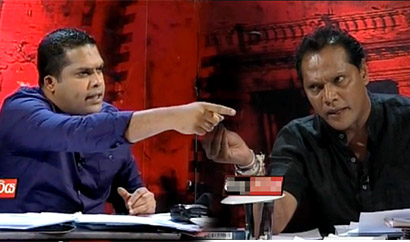 Badulla District MP Fernando, widely believed to be the UNP’s chief ministerial candidate at the forthcoming Uva Provincial Council polls, alleged that CM Jayasekera had attacked him during a break. Other participants, namely JVP MP Sunil Handunett and UPFA MP Arundika Fernando had intervened to settle the fight, he claimed.CM Jayasekera denied MP Fernando’s allegation that he had bitten the former colleague’s shoulder. He MP Fernando had made many unsubstantiated allegations against the government and its senior members including President Mahinda Rajapaksa.