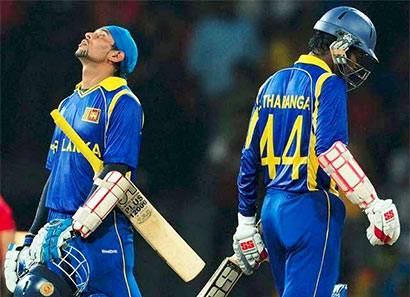 Ahmedabad: Sri Lanka batsman Tillakaratne Dilshan is hopeful of his team’s comeback in the five-ODI series against India despite a crushing 169-run defeat in the first game at Cuttack on Sunday. The Sri Lankans, chasing a mammoth 364 to win, were rattled by fast bowlers Varun Aaron and Umesh Yadav at the start of their innings and they never really recovered after that, eventually folding for 194, but Dilshan thinks that performance wasn’t a true measure of his team.

“I think we have in the past not done well at the start but have bounced back in the series. We have to forget what happened in the last match and play our brand of cricket. That’s the main target for the team. And as a team we are just focusing on that,” Dilshan told reporters ahead of the second ODI here on Thursday.

Sri Lanka don’t have the services of their premier bowler Lasith Malinga who, along with spinner Rangana Herath, has been rested for the series. Dilshan acknowledged his team missed Malinga but also emphasised his absence gives other bowlers a chance to make their mark. “I think he [Malinga] is a great bowler and he has done really well for Sri Lanka in the last five-six years but this is a good opportunity for the youngsters,” Dilshan said.

“If you see, [Lahiru] Gamage bowled really well in the first match. It’s a good challenge for the youngsters to get the job done for Sri Lanka. They should make use of this opportunity to the maximum. But yes, Lasith has been great for us.”

Virat Kohli, India’s stand-in captain for the series, caught a lot of attention with his “earlier than usual” batting Powerplay move at Cuttack that fetched the hosts 62 runs in five overs. Dilshan too spoke favourably of the decision that was taken by Kohli at the start of the 24th over. “I think they made a very good move by taking an early batting Powerplay. We also didn’t expect them to do that at that stage,” the 38-year-old said.

“It was a surprise for us. But they [Shikhar Dhawan and Ajinkya Rahane] were batting well, they were well-set at that moment. I think that’s when you have to take that power play because both the batsmen would be going really well. It was a good move from them I think we can learn from it.”

The Motera pitch is expected to be full of runs and Dilshan thinks his team’s batsmen should make the most of it, especially if they bat first. “I think you have expect the teams to score 290-300 with the new rules in place. Just four fielders outside the circle after the first 10 overs is not easy to contain the batsmen especially in India,” he said.

“The wickets are flat and the Indian batting line-up is good. As a batting unit we have to go and get those runs. And we are batting first, we have to set up 300-plus target. That’s become the norm now.”

1 Response to Dilshan confident of Sri Lanka bouncing back