Dinesh Herath thanks his family after winning gold in Tokyo 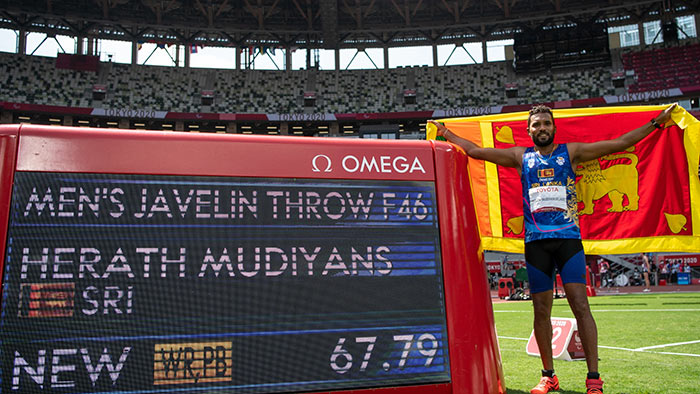 The 35-year-old stormed to gold when he threw 67.79 in his third attempt which broke a previous world record set by India’s Devendra. Meanwhile reigning Rio 2016 champ Devendra claimed silver after making a best throw at 64.35.

“I am very happy because my main dream came true. I have no words to describe (the feeling),” said Priyantha, who kissed the Sri Lankan flag after claiming victory.

“This is the best example for Sri Lankan para athletes,” the 35-year-old athlete added.

Whilst this is a historic achievement for all Sri Lankans, there is one person that Priyantha dedicates this gold to: his wife

“I have three children and my wife looks after them very well. She motivates me. Our youngest child is only eight months old. (My wife) has done everything. She has given me freedom to do sport. I thank my wife for this gold.”

Priyantha was serving in the army until a gunshot wound in his left arm derailed his army career. He stayed in the hospital for more than four years but took up sports when he recovered.

“When I was a schoolboy, and (later) in the army, I didn’t play any sports. After I got injured, I was in hospital for more than four years. I had three gunshots to my arm during the war in Sri Lanka in 2008.

“Because I was in an infantry regiment, most of my friends also got injured the same day. So they were in the hospital chatting to each other.

“After I recovered, I wanted to play a sport as a recreation. My wife was a maximal boost for me.”

His decision to take up athletics was not in vain. Today, he stood on that track as a champion and a true Olympian.

Home » Dinesh Herath thanks his family after winning gold in Tokyo