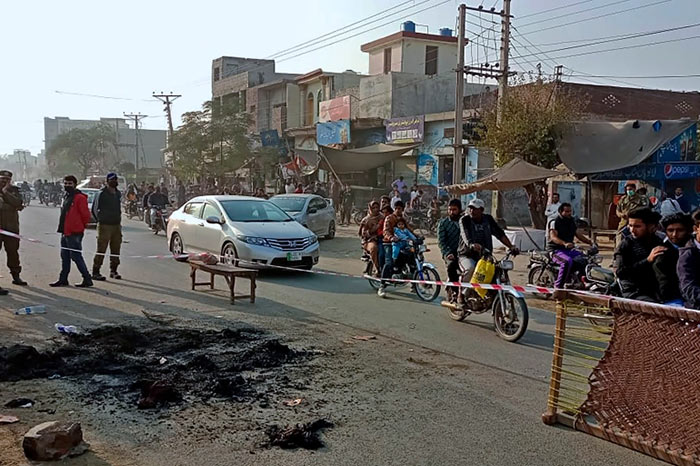 Police officers stand guard at the site where a Sri Lankan citizen was lynched by Muslim mob outside a factory in Sialkot, Pakistan. (AP Photo / Shahid Akram)

A total of 50 individuals have been identified and arrested after mob in Sialkot on Friday mercilessly killed a Sri Lankan man and burnt his body, Reuters quoted a Pakistani provincial government spokesperson.

The incident took place on Wazirabad Road in Sialkot, where it was reported that a group of workers of private factories tortured the victim to death and burnt his remains.

The deceased was later identified as Priyantha Kumara, who worked as a manager of a factory of the industrial engineering company.

Gruesome video clips shared on social media showed hundreds of people gathered in the streets of Sialkot, one of Pakistan’s most industrialized regions and an angry mob brutally trashing the factory manager while jeering religious slogans.

The Sri Lankan manager was murdered for allegedly tearing down a religious poster of the ultra-radical Islamist party Tehreek-e-Labbaik Pakistan (TLP) in which Quranic verses were inscribed.

Meanwhile, Pakistani Prime Minister Imran Khan, in a tweet, said, “The horrific vigilante attack on factory in Sialkot & the burning alive of Sri Lankan manager is a day of shame for Pakistan. I am overseeing the investigations & let there be no mistake all those responsible will be punished with full severity of the law. Arrests are in progress.”