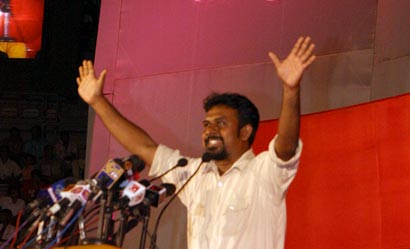 The Convener of the Jana Aragala movement Chameera Koswatte says that the government cannot escape from the responsibility of ensuring the security of two of its members who went missing in Jaffna recently.

He made this statement during a media briefing Wednesday.

“We urge the Government, the Minister of Defence as well as the IGP to ensure the safety of our comrades who were abducted in Jaffna. The Government cannot escape from this responsibility.’’

’’There is a process of abducting people, fingers are directly being pointed at the Government in this regard. No one from the government has come forward to provide an explanation. This is a sad situation” said the Convener of Jana Aragala Movement Chameera Koswatte

“It is clearly evident that there is a culture of abductions that has taken root in the country over the past three months. We have received reports of abductions from areas such as Pita Kotte, Warakapola, Jaffna,
Kelaniya and Wattala.’’

’’Various people are blamed for these abductions. However it is clear that these individuals are people who were engaged in political activities. Even the members of their families are being abducted,” said the Executive Director of CAFFE, Keerthi Tennakoon