Shortage experienced in many parts of the country 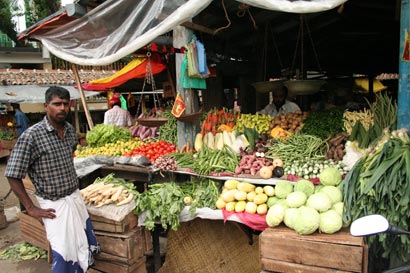 Amid protests in Colombo and the suburbs intensifying yesterday over the use of plastic crates to transport vegetables and fruits, a compromise was reached at the Dambulla Economic Centre among the security forces, traders and farmers to continue with the customary form of packaging. The three-day crisis has caused a severe countrywide shortage of fruits and vegetables with prices of such items sky rocketing.

However, Internal Trade Minister Johnston Fernando vowed to stick to his decision to make it compulsory to transport fruits and vegetables in plastic crates for the greater good of the consumer.

Protest marches in Colombo Fort turned violent with the protesters nearly clashing with the police. Protests were held in Tambuttegama, Nuwara Eliya, Ratnapura and Bandarawela.

He rejected allegations that plastic crates were introduced to allow someone connected to the ministry to make money.

Home » Shortage experienced in many parts of the country