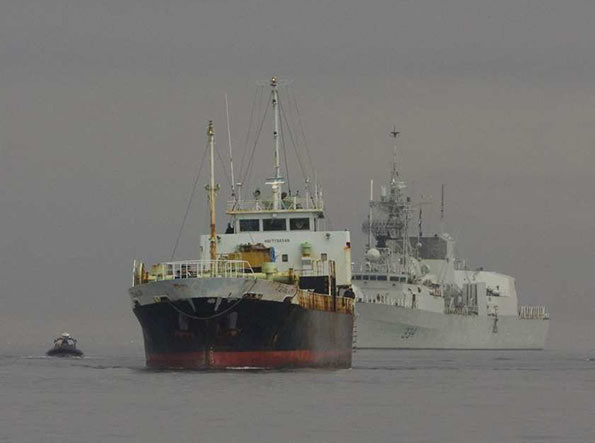 Last Wednesday, a jury found three men charged with smuggling 492 Sri Lankan Tamils into Canada aboard the MV Sun Sea in 2010 not guilty. The judge in the case declared a mistrial for the fourth accused.

On Tuesday, four more men — Francis Anthonimuthu Appulonappa, Hamalraj Handasamy, Jeyachandran Kanagarajah and Vignarajah Thevarajah — entered not guilty pleas after re-electing to be tried by judge alone instead of by a jury.

The four accused in the second trial allegedly smuggled 72 Tamil migrants into Canada aboard another ship, the MV Ocean Lady, in 2009.

Some of the same issues involved in the first trial are expected to be at the heart of the second trial.

At the first trial, the accused argued that they were either acting for a humanitarian purpose or had been misidentified by the authorities.

In her opening statement Tuesday, Crown counsel Margaret Loda said that the main issue will be whether the actions of the accused fall within or outside the exceptions to human smuggling under the Immigration and Refugee Protection Act, those exceptions including providing humanitarian aid.

“At the end of the day, the Crown will be arguing that all four men helped move 72 undocumented migrants into Canada and that their primary motive was financial,” Loda told B.C. Supreme Court Justice Arne Silverman.

Loda said that in September 2009, the ship left the shore of a small port on an island just north of Jakarta, Indonesia, travelling towards Canada through the Gulf of Thailand.

At the time the MV Ocean Lady left Indonesia, it had about 40 Sri Lankan Tamils aboard. Somewhere in the Gulf of Thailand, it picked up about 35 more migrants, who met the ship on the open seas aboard small fishing trawlers.

The ship was a coastal vessel that was intended to accommodate only 10 crew members and was not designed to cross the ocean, she said.

Handasamy was the captain of the ship and Thevarajah was the chief engineer, in charge of the engine room, said the prosecutor.

“The Crown’s theory is that these two men were in charge of the ship and all of the people on it.”

On one occasion, some of the migrants were threatened that if their payments didn’t come through, they would be sent back to Sri Lanka, said the Crown.

The two other accused — Appulonappa and Kanagarajah — had important jobs on and off the ship, said Loda.

Appulonappa also worked in the engine room and Kangarajah was responsible for distributing water to the migrants, both of them receiving reduced fares for the trip, said Loda.

The second trial has had a protracted journey through the courts.

In January 2013, Justice Silverman ruled that the human smuggling law was unconstitutional and dismissed the charges against the accused.

In May 2014, a three-judge panel of the B.C. Court of Appeal overturned Silverman’s ruling and ordered a new trial.

But that ruling was appealed to the Supreme Court of Canada, which found that acts of humanitarian assistance or aid between family members do not amount to smuggling. Canada’s highest court ordered a new trial for the four men.