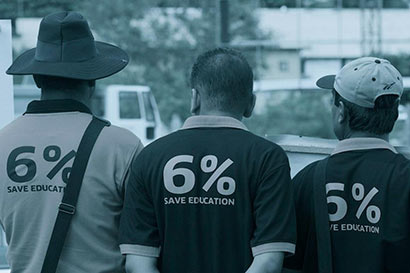 The Executive Committee of the Federation of University Teachers’ Association (FUTA) yesterday decided to end their three month strike and resume work today.

Economic Development Minister Basil Rajapaksa told the media yesterday FUTA had informed him of their decision to end the strike. FUTA too later announced their decision to end their trade union action. FUTA members did not participate in a press briefing at the Economic Development Ministry yesterday where both sides were slated to issue a joint statement.

Minister Rajapaksa commenting on the absence of FUTA members said they informed him that their Executive meeting was going on during the media briefing. The minister who acted as a mediator to resolve the strike, said FUTA representatives informed him of their willingness to call off the strike during talks held several days back as well.

He said FUTA representatives informed him they would make their membership and affiliated organisations aware about the outcome of talks followed by a final decision by the Executive Committee.

They were also willing to make a joint statement to the press with the government authorities to announce their decision, he said.

The minister said he too had told FUTA representatives that he will make all government stakeholders aware about the outcome and was prepared to make a joint statement thereafter.Minister Rajapaksa said the government policy at all times was to give the highest priority to the education sector and provide whatever allocations for its uplift.

“During discussions, both parties agreed that the progress of education should be given highest priority and the need to create a conducive environment to realise the aims for the sector as envisioned in the Mahinda Chinthana,” he said.

Referring to the university teachers demands, the minister said all what is reasonable and affordable has been given.

He said both sides agreed that solutions for such matters should be sustainable and hence had to work on a long time basis.

Higher Education Minister S B Dissanayake explaining FUTA demands said the various demands by the union had been brought under eight main points, which was later approved by the Cabinet.

He said discussions in this regard had taken place between FUTA and various stakeholders, including the Treasury Secretary to solve salary issues, Secretary to the President, Minister Basil Rajapaksa and education authorities.Dissanayake said university staff will be paid salary arrears for the period when the strike was on and they have also been assured that there will not be any victimisation following a request by the FUTA.

The minister said the government was also on the same wave length with FUTA when it came to demands such as ensuring independency within universities and allocation of more monies for the uplift of education.

He said the government is to consider university lecturers as a special vocational category and a service. A special Presidential Committee too is to be established to make the proposals and suggestions to be introduced in the higher education sector.